Den of Geek
Wednesday. (L to R) Jenna Ortega as Wednesday Addams, Thing in episode Photo: Netflix. This article contains spoilers for the ending of Wednesday ... 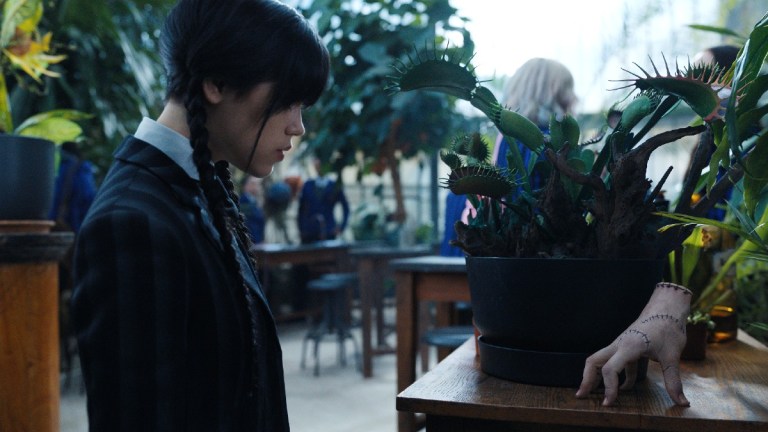 This article contains spoilers for the ending of Wednesday.

Netflix’s Wednesday certainly delivered thick and fast with the mysteries and twists this season, so you’ll be forgiven if you weren’t entirely able to keep up.

Forget “lions and tigers and bears, oh my!” like The Wizard Of Oz, this creepy and kooky teen (played by Jenna Ortega) wasted no time before falling into trouble at Nevermore Academy. After that, life-threatening danger just kept on coming her way.

But while Wednesday definitely went wrong on more than one occasion, it turns out this macabre character was on to something when it came to monsters – both human and supernatural. In fact, it was kind of her destiny.

So who exactly was the monster stalking the woods of the school grounds, and why was some mystery force specifically targeting her?

Here’s how the season 1 finale played out.

Wednesday: Who and What Was the Monster?

With the help of a quick visit from her beloved Uncle Fester (Fred Armisen), Wednesday discovered the killer creature on the loose was a Hyde – a volatile outcast form which looks well-meaning and sweet-natured, but harbors a dark side which transforms on command once unlocked.

After some digging, she becomes convinced the Hyde was Xavier (Percy Hynes White), and with “evidence” gets him arrested for the murder of six “normies” in the woodland outside the school grounds. Turns out she was way off base – and both her and Sheriff Galpin (Jamie McShane) should’ve been looking a little closer to home.

It was actually Tyler (Hunter Doohan), the Sheriff’s son, and her right-hand man in her search. Awkwardly, the teen discovers this after she kisses him, and her telepathic powers reveal the truth in a vision.

While her powers didn’t activate at school, Tyler’s mother was triggered into a Hyde by post-natal depression from Tyler’s birth. The family covered for her, saying it was bipolar disorder, to prevent the judgement of small town Jericho.

Get the best of Den of Geek delivered right to your inbox!

So Wednesday springs into action to get Tyler to confess… only her way of interrogation leaves a little to be desired as it’s literally torturing the truth out of him.

Initially securing the help of the Nightshade Society to lure him into the woods, Wednesday chains Tyler up and tases him. This freaks out the Nightshades, who didn’t know she was planning violence, and they bolt when Wednesday starts considering even more vicious methods. Rather than help her, they instead report her to Principal Weems.

But Tyler was definitely a murderous psychopath, and even confesses to Wednesday when he thinks he’s beaten her. However, Hydes need to be unlocked by a “master”, so he was somewhat under the control of someone with their own agenda against Nevermore.

Who Was Tyler’s Master and Why Are They Targeting Wednesday?

Wednesday is a little too easy to jump to conclusions, but her visions and connections to summon the dead link her back to Jericho’s Pilgrim roots in the form of Goody Addams (also Jenna Ortega).

Goody was a native of the area, but as the Pilgrims settled, their leader Joseph Crackstone (William Houston) tried to kill her for being a witch. She managed to escape the fire that wiped out all her people, cursing and killing him, but his ancestors lived on in the town.

In fact, since the 1800s, several Addams ancestors had killed off Crackstone descendants, including Morticia, who stabbed Garrett Gates with a sword when he was poisoned and came after her when she was at Nevermore.

His death broke apart the family with them all meeting grisly ends, with his sister Laurel disappearing, believed to have died at sea. Turns out she hadn’t and was trying to carry out revenge on the school, and her family, for their role in her family’s demise.

Wednesday jumps to conclusions and believes psychiatrist Kinbott is Laurel, as in her opinion she’s far too clever and successful than to choose to be in the small rural town because she wants to. Her idea makes logical sense, with her position allowing her to poke and prod at the minds of those in her care to unlock a Hyde without detection, and enough consistent access to command them to carry out her plans. Too bad she dies at the hands of the Hyde.

When the Master’s mission results in Wednesday’s bee-loving friend Eugene (Moosa Mostafa) ending up in the hospital after an explosion, she sees red. Turns out, Eugene did too. When Wednesday is expelled from Nevermore for her attempts to torture Tyler, Principal Weems allows one last kindness and let’s Wednesday visit Eugene in hospital to say her goodbyes before she’s sent home.

Eugene reveals the person behind the explosion wore red boots, and suddenly everything clicks – it wasn’t Kinbott (Riki Lindhome). It was Marilyn Thornhill (Christina Ricci), the only “normie” teacher working at Nevermore, and one who’d taken keen interest in Wednesday’s “progress”.

Returning to the school, Wednesday manages to get the truth out of her with the help of Weems, who shapeshifts into Tyler to convince Thornhill he’d fallen out of her spell.

Thornhill (or Laurel, if you want to go by real names) is a little too quick, and injects Weems with deadly agent nightshade, killing her instantly. She then kidnaps Wednesday and takes her to Crackstone’s crypt with Tyler, revealing she wanted to complete her ancestor’s plan to rid the world of Outsiders forever.

She had been commanding Tyler to kill normies to collect their body parts to resurrect Crackstone herself. All she needed was Goody Addams’ bloodline to unlock his sarcophagus, which is why she needed Wednesday.

Laurel succeeds in her mission – and Wednesday is left to bleed out in the crypt alone after being stabbed through the chest by the vengeful Crackstone. Laurel got more than she bargained for though, as it turns out Crackstone was a raging misogynist (hey, it was the 1800s when he was alive the first time) who wants nothing to do with her.

How Does Wednesday Stop Laurel and Tyler?

The isolated and anti-social Wednesday learns a valuable lesson in the importance of having friends to have your back as the massive showdown occurred. Despite their differences, Nevermore students are ready to rally around her. None more so than colourful roommate Enid (Emma Myers), who under the night’s blood moon finally makes her first ever transformation into a werewolf.

As she turns, she ends up in a head-to-head battle with Tyler/The Hyde in the woods, with neither coming off unhurt. But she defeats Tyler before turning back, terrified, into herself.

The Nightshades manage to get most of the student body out of the school safely, with Bianca (Joy Sunday) using her siren power to command people to follow her lead.

That leaves just a select few within the school grounds, and as the ancient Crackstone (who, for someone who hates those with supernatural abilities, seems pretty good as mastering his own) heads into the courtyard, he sets the area ablaze in a promise to defeat the Outsiders for good.

However, he didn’t count on his old foe Goody Addams being ready with a plan. Coming to a dying Wednesday, she uses the last of her supernatural strength to pass through her, healing her but meaning they could never see each other again. Galvanised by one last speech from her ancestor, Wednesday heads into the courtyard to confront Crackstone, who believes her return from an almost certain death to be witchery. Xavier arrives and shoots an arrow at him, but using telekinesis, Crackstone turns it around and shoots it back. Wednesday jumps in the way and gets hit in the shoulder, and she’s wounded once again.

As Crackstone goes to kill her once and for all, Bianca surprises him by stabbing him through the back – but she misses his heart, and he knocks her out. Bianca’s act of bravery was just enough to give Wednesday time to get back on her feet, and she finally completes the job, stabbing him through the heart and turning him into fire and ash to disappear forever.

Laurel – who was sent away by Crackstone for talking too much – then reappears with a gun. While her plan has failed, she does have the opportunity to kill Wednesday. But just as she aims, she is attacked by a swarm of bees being commanded by Eugene, who has busted out of hospital and made it to the courtyard just in time to save Wednesday.

With Laurel on the ground, Eugene encourages Wednesday to take her to the Sheriff, but the teen is way past that point. Instead, she curb stomps Laurel, presumably killing her.

Joining the rest of the student body in the woods, she is reunited with her best friend Enid, and for the first time, seeing her brightly coloured friend covered in blood, finally accepts a hug from her.

Given everything that happened, the school packs up for the year early. Wednesday and Enid pay their respects to the death of Principal Weems, and say goodbye to each other.

While things are far from easy for any of the students, there’s an unspoken sense of unity among them now after saving the school and their world.

As Wednesday says goodbye to Xavier, he gives her an iPhone so she “can maybe text him once in a while”, and she reluctantly agrees.

But someone else has already got hold of the number, and as Wednesday and Thing drive off home, she receives a series of threatening texts as well as photos taken without her knowledge of her with Tyler and Xavier.

While this would scare most people, this thrills Wednesday. What’s not to love about a new mystery to solve and her first ever stalker? As she begins her new investigation, a security car passes by containing a drugged-up and straight-jacketed Tyler, and just as the show cuts to black, he “Hydes out” once again.

We’ll have to wait until season 2 to see who else has it in for his mysterious and spooky wannabe detective.

Wednesday is available to stream now on Netflix.