Late red card changes everything for Iran, Wales — and USMNT

Al RAYYAN, Qatar — Iran substitutes Roozbeh Cheshmi and Ramin Rezaeian broke Wales' hearts with thrilling stoppage-time goals in a dramatic 2-0 victory Friday that will have a major impact on the United States' hopes of advancing from Group B.

While a draw likely would have been the best possible outcome for the U.S., the Iran victory is a second-best scenario, giving the Americans a terrific chance to qualify with a win — either later Friday against England (2 p.m. ET on FOX and the FOX Sports App) or Tuesday in the group-stage finale against Iran.

The "FIFA World Cup Now" crew takes a look at the Group B standings following Iran's victory over Wales. The United States controls its own destiny with a win or tie against England.

It looked like the Americans were going to get their hoped-for draw in the early match at Ahmad bin Ali Stadium, until dramatic late goals from Chesmi and Rezaeian — in the eighth and 11th minutes of added time, turned the contest, after Wales goalkeeper Wayne Hennessey had been red-carded in the closing stages.

The wild finish brought tears all around.

Iran's journey has been deeply emotional, with its own supporters booing the national anthem before the game in protest at their country's governmental regime.

And Wales, so strong in the second half of Monday's 1-1 tie with the United States, had several players burying their heads in their jerseys as their campaign reached a state of desperation. 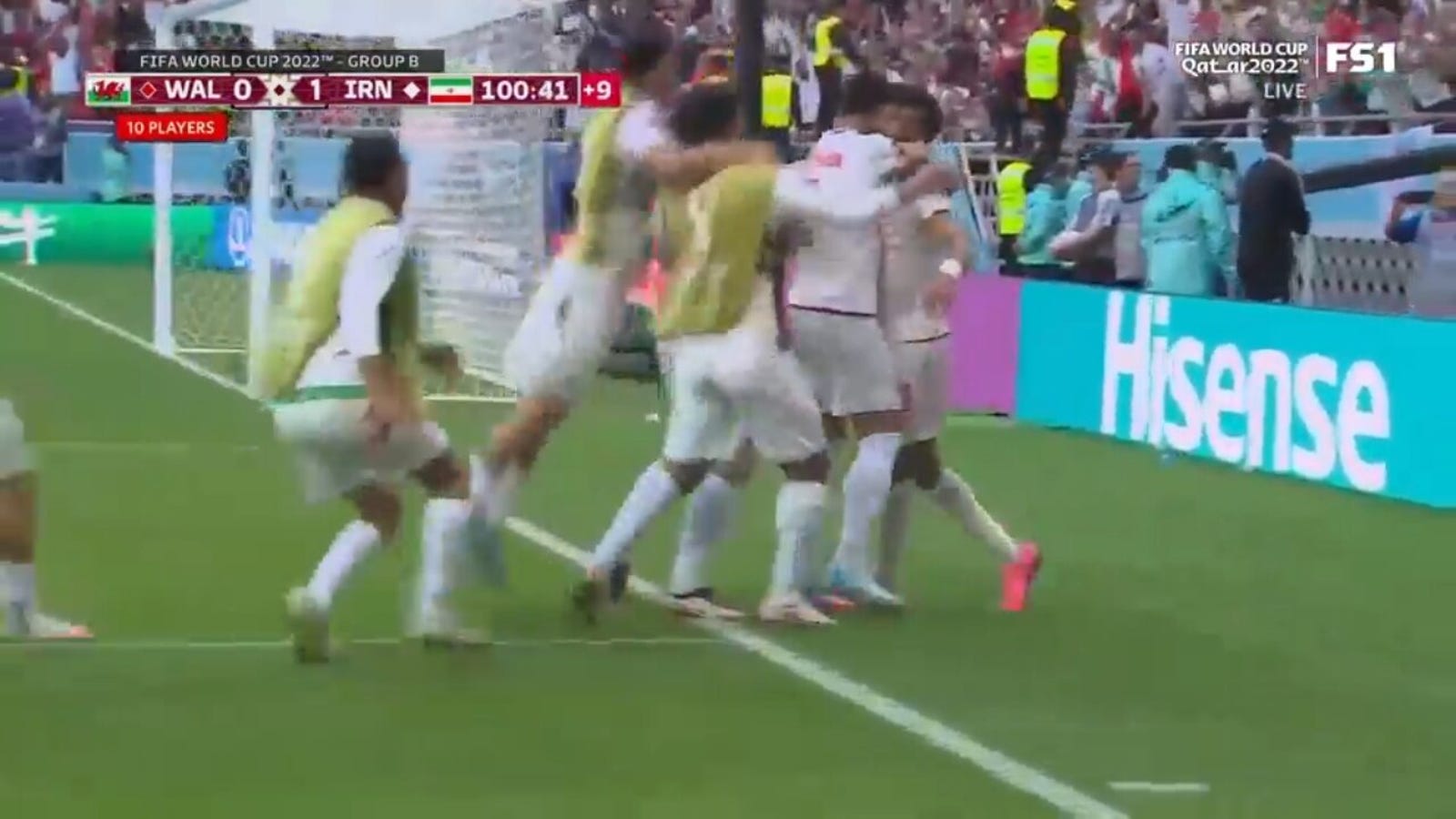 Iran pulls out an incredible last-minute win against Wales with goals by substitutes Roozbeh Cheshmi and Ramin Rezaeian.

"It's just the beginning," Iran coach Carlos Queiroz said. "We need to finish the job. I don't have words how to say thank you to our players. They deserve all the respect."

Hennessey's dismissal, in many ways, changed everything. Even though Iran was by far the stronger team after the interval, it appeared as though the game was heading for a stalemate.

But then Hennessey rushed from his area to try to clear a long ball forward, missed his clearance, and collided with advancing forward Mehdi Taremi. After initially being issued with a yellow, a VAR review changed the decision, upgrading it to an outright dismissal.

Following the results from the opening round of Group B matches Monday, there emerged a specific pecking order of outcomes that from this match that were most favorable for Gregg Berhalter's USA squad.

A draw — especially one with no goals — was at the absolute top of that pile. However, an Iran win would have been the No. 2 option, and the USA now knows it can go clear at the top of the group with a win against England at Al Bayt Stadium.

A draw against England would bring a clear requirement for the last game — beat Iran to qualify. A loss to England would also require a win over Iran, while hoping Wales could not bounce back and beat England.

Wales' Wayne Hennessey receives a red card after a nasty out-of-the-box collision against Iran's Mehdi Taremi in the 82nd minute.

Iran, disappointing in a 6-2 defeat to England, responded magnificently and played with spirit and tenacity throughout. From nowhere, they have become one of the stories of the tournament.

Ali Gholizadeh put the ball in the net after 15 minutes, only for his effort to be ruled out for offside. And Wales, even with Gareth Bale and big striker Kieffer Moore — who gave the USA so much trouble — in the starting lineup, were unable to generate much real threat.

In the second half, Iran's fitness levels showed, and it began to dominate the proceedings. Coach Carlos Queiroz screamed in dismay after a double dose of misfortune, when Sardar Azmoun's strike hit the post after he charged clear of the Wales defense and then, seconds later, Gholizadeh also rattled the woodwork with a curling effort from the edge of the box.

Azmoun, whose inclusion in the squad was in doubt last week after he added his voice to the widespread national protests in Iran, was replaced in the 69th minute after an afternoon of intense effort that perhaps should have generated greater reward.

Iran was able to capitalize late after goals by Roozbeh Cheshmi and Ramin Rezaeian in stoppage time.

In the end, it didn't matter. Cheshmi collected the ball on the edge of the area and took his chance, as Wales tried to hold on grimly with 10 men. His strike seared past replacement keeper Danny Ward and into the net.

As Wales attempted to throw men forward, Iran broke once more, Rezaeian finishing off a swift counter-attack to complete a historic triumph — as Iran aims to reach the knockout round for the first time in history.

Read more from the World Cup:

Martin Rogers is a columnist for FOX Sports and the author of the FOX Sports Insider newsletter. Follow him on Twitter @MRogersFOX and subscribe to the daily newsletter.

Get more from FIFA World Cup 2022 Follow your favorites to get information about games, news and more