The Dallas Morning News
Share on FacebookShare Share on TwitterTweet
AUSTIN — Texans will no longer be required to wear a face mask in public, and all businesses will be able open at full capacity starting next week, Gov....

Updated at 7:16 p.m. with additional details and reaction.

AUSTIN — Texans will no longer be required to wear a face mask in public, and all businesses will be able open at full capacity starting next week, Gov. Greg Abbott announced Tuesday.

The Republican made the sweeping move — on Texas Independence Day — even though public health officials say restrictions are still critical to control the pandemic, which has killed more than 42,500 Texans.

Abbott cited growing vaccination rates for his decision, though fewer than 2 million Texans are fully inoculated against COVID-19 in a state of 29 million. The announcement puts Texas at odds with federal experts, who have said that even as vaccinations rise, people still need to wear masks, avoid crowds and socially distance.

Abbott also pointed to declines in hospitalizations, but experts warn that those are slowing and could reverse.

Texans will be in charge of managing their own individual safety, Abbott said, using practices learned during the pandemic.

Starting next Wednesday, the mask mandate will be lifted and all businesses will be allowed to open at 100% of capacity for the first time in nearly a year. While Abbott noted that businesses can still choose to limit occupancy or require masks, the change opens the door to potentially massive social gatherings, including at sports stadiums, concert halls and other large venues.

“Too many Texans have been sidelined from employment opportunities. Too many small business owners have struggled to pay their bills. This must end,” Abbott said at a crowded restaurant in Lubbock, where many around him went without masks.

“It is now time to open Texas 100%,” he said to cheers from an audience that included members of the local chamber of commerce.

But the move faced pushback from public health experts. While new COVID-19 cases and hospitalizations have fallen from a peak in January, levels of disease are still high. As of this week, about 5,600 people across Texas are hospitalized with the disease. The state has been averaging about 5,000 new cases per day over the last week.

The impact of the recent winter storm on transmission is unclear. Some households banded together during statewide power outages, but people also spent less time at work, school and stores.

Rolling back the restrictions is risky, especially before spring break, because that’s a time when people typically travel, gather in groups and go out to bars, said Diana Cervantes, an epidemiologist at the University of North Texas Health Science Center in Fort Worth.

“We don’t want a spring break spike,” she said. “Right now we’re at a critical cusp point where things could definitely turn around. It could either go up or down.”

Letting up on social distancing and masking also increases the likelihood that new, more dangerous variants of the virus will emerge, experts cautioned.

The pace of vaccination in Texas is expected to pick up with the recent approval of a third vaccine, made by Johnson & Johnson, that requires only one dose. Still, it is not yet clear when vaccines will be widely available for the general public. President Joe Biden announced Tuesday that the country would have enough coronavirus vaccine for all adults in the U.S. by the end of May, two months ahead of an earlier schedule.

Texas is currently limiting shots to priority groups including front-line health care workers, the elderly and people with underlying health conditions. Teachers and workers at heightened risk of exposure to the virus on the job, such as grocery store workers and bus drivers, are not yet eligible. Abbott has hinted the state could expand vaccine access as early as this month.

Two of Abbott’s four medical advisers, whom he named at the beginning of the pandemic, said they were not part of the decision to eliminate the mask mandate and let businesses open completely.

Mark McClellan, former commissioner of the U.S. Food and Drug Administration and director of the Duke-Margolis Center for Health Policy at Duke University, said in an email Tuesday that he “was not consulted on this decision.”

Dr. Parker Hudson, an assistant professor of internal medicine at Dell Medical School in Austin, said he “was not involved.”

Another of the advisers, Dr. John Zerwas, is a vice chancellor for health affairs at the University of Texas System and a former Republican state representative. Zerwas said that Abbott had consulted him and that he agreed with the changes, in part because Texas is currently on a good trajectory.

The fourth adviser, Dr. John Hellerstedt, commissioner of the Texas Department of State Health Services, did not immediately respond to a request for comment. Neither did Abbott’s office.

County judges will be able to impose their own coronavirus restrictions if COVID-19 hospitalizations rise above 15% in their region for seven straight days. As of Tuesday, just one area in Texas met that criterion: the region including El Paso, according to state data.

The region that includes Dallas and Tarrant Counties was at 8.7% as of Monday.

Dallas County judge Clay Jenkins chastised Abbott on Twitter for lifting “all his state orders designed to protect you and those you care about” from coronavirus on the same day the county’s COVID-19 death toll topped 3,000.

“You should focus on what doctors, facts and science say is safe,” Jenkins urged residents, “not on what Gov. says is legal!” 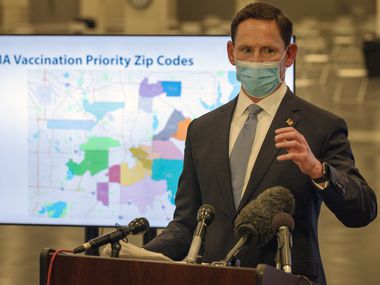 Tarrant County Judge Glen Whitley said he would remove the county’s mask mandate Tuesday, in light of Abbott’s announcement, according to the Fort Worth Star-Telegram.

Stephen Love, president and CEO of the Dallas-Fort Worth Hospital Council, pleaded with Abbott to reconsider his moves.

It remains to be seen how the changes will affect school districts and professional sporting events. School districts had been waiting for more guidance from state education officials. And the Texas Rangers, who hope to welcome fans to their new ballpark, were deciding whether Abbott’s move could pave the way for larger crowds. 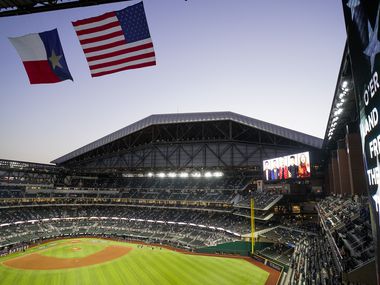 Abbott’s announcement drew praise from Republicans, including Lt. Gov. Dan Patrick, who said it would “help us restore the livelihoods of millions of Texas even faster.”

House Speaker Dade Phelan, R-Beaumont, said the governor’s action “marks an important step in the reopening of Texas, improving the mental health of our students, increasing the reporting of domestic violence and child abuse, and revitalizing our business climate.”

But Democrats in the Legislature were quick to slam Abbott’s decision, pointing to a recent warning from the U.S. Centers for Disease Control and Prevention that now is not the time to relax restrictions.

“If the last year has taught us anything, it is that we need to listen to doctors and scientists more, not less,” said Rep. Chris Turner of Grand Prairie, who chairs the Texas House Democratic Caucus. “Unfortunately, Governor Abbott is desperate to distract from his recent failures during the winter storm and is trying to change the subject.”

At the White House on Tuesday, press secretary Jen Psaki was asked if Biden was lobbying Abbott and other governors to keep safety precautions in place.

“Having traveled with the president to Texas on Friday, he made clear that we need to be vigilant,” Psaki said. “We need to remain vigilant. We are still at war with the virus.”

Abbott, who will be up for reelection in 2022, has been facing pressure from some within his own party to repeal restrictions they say infringe on their personal freedoms. Last week, Shelley Luther, the Dallas salon owner who made national headlines for defying state shutdown orders last spring, criticized the governor’s response to the pandemic on a national stage at the Conservative Political Action Conference in Florida.

Most Texans have been required to wear a face mask in public since July. Restaurants and bars have been limited in the number of customers they can have inside since last spring, after the first cases of the coronavirus were detected in Texas.

Right now, many businesses in Texas, such as restaurants, bowling alleys and movie theaters, are open at 75% of capacity. They must scale back when at least 15% of hospital beds in their region are taken up by COVID-19 patients for seven days straight.

Public health experts say masks have been critical to slowing the spread of the virus while allowing people to go out in public, work at stores and restaurants, or attend school, because the disease is largely transmitted through the air. On Tuesday, many school districts said they would continue to require masks until they receive further guidance from state education officials.

Crowded indoor gatherings have been shown to be especially dangerous venues for spreading the virus. 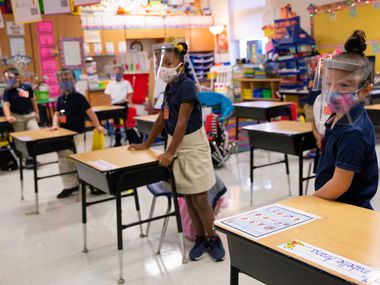 A recent report from the CDC suggested that exposure to airborne virus decreased by about 95% when both an infected person and a noninfected person wore masks. Some experts have recently advocated wearing two masks as more transmissible variants have emerged.

Other recent research has also reinforced the notion that merely staying six feet away from other people does not guarantee safety, especially indoors, making masks and good ventilation all the more important for slowing spread of the virus.

Thirty-five states across the country require people to wear masks in public to prevent the spread of COVID-19, according to AARP.

But some, like Texas, are abandoning the policy. Mississippi lifted restrictions Tuesday. Governors in Montana and Iowa lifted mask orders last month, and North Dakota let its policy expire in January as cases there fell. In all, 15 states now have no mask requirements.

“Today’s announcement does not abandon the state practices that Texans have mastered over the past year,” Abbott said Tuesday. “Instead, it is a reminder that each person has their own role to play in their own personal safety.” 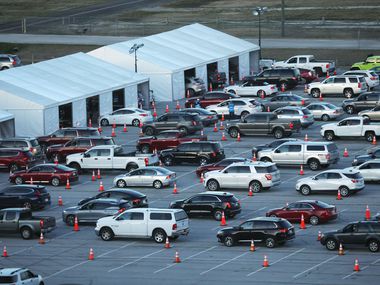 Dr. Anthony Fauci, Biden’s chief medical adviser, recently suggested in an interview on CNN that people might need to keep wearing masks until 2022.

Last week, the CDC director, Dr. Rochelle Walensky, warned that the decline in U.S. cases from record highs in January had slowed, and possibly even flattened out.

Variants of the virus that are more transmissible are also spreading. Walensky said last week at a White House press briefing that the so-called U.K. variant was accounting for up to 10% of new cases in the U.S., up from 1% to 4% a few weeks earlier.

“We may be done with the virus, but clearly the virus is not done with us,” Walensky said. “I know people are tired and they want to get back to life, to normal, but we’re not there yet.”