Canada put on a show in its return to the World Cup after a 36-year absence but failed to convert its chances in a valiant 1-0 loss to Belgium on Wednesday.

The 41st-ranked Canadians looked anything but awed at the occasion, repeatedly forcing the second-ranked Belgians onto the back foot.

And Canada had a glorious chance to score its first-ever World Cup goal and take the lead in the 10th minute, only to see Thibaut Courtois, the Inspector Gadget-like Belgian goalkeeper, stop Alphonso Davies' penalty attempt after Yannick Carrasco was yellow-carded for handball. The 22-year-old from Edmonton clutched his face in disappointment.

The pace and press of the Canadians caused the Belgians real discomfort in a first half that saw the Canadians launch 14 shots — the most without scoring in the first half of a World Cup match since England (17) against Trinidad and Tobago in 2006, according to sports analytics company Opta.

"They proved they can play here," Canada coach John Herdman said of his players.

Most of Canada's efforts were off-target. Belgium attempted four shots and made one count late in the half. 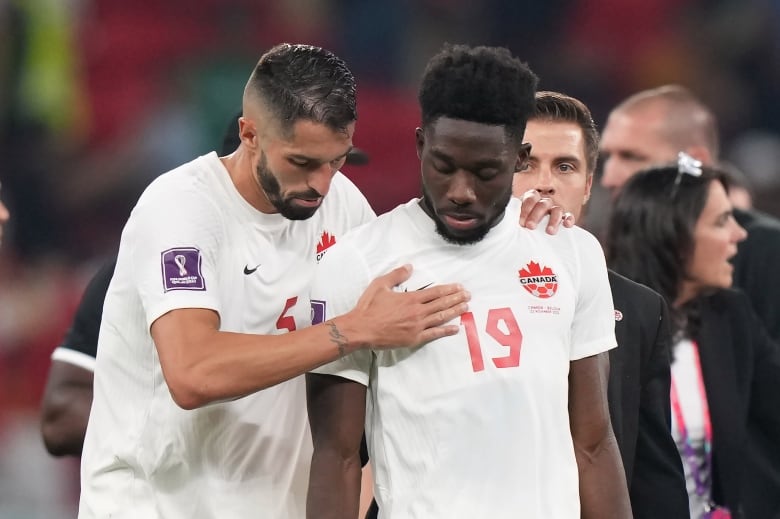 Michy Batshuayi quietened the pro-Canada crowd in the 44th minute, bringing down a well-flighted long ball from defender Toby Alderweireld that Canadian Steven Vitoria just missed getting his foot to. Batshuayi outpaced the chasing Kamal Miller and Richie Laryea and calmly beat Milan Borjan for a 1-0 lead.

Borjan punched the ball away in disgust.

"I don't think we played a good game today," Belgium star Kevin De Bruyne said. "The good thing is we found a way to win."

The Red Devils had more time on the ball and more chances on the counter-attack in the second half. But Canada never stopped looking dangerous. It was tense right up to the final whistle after five minutes of stoppage time.

"It's not easy to score goals at this World Cup, as you can see," Herdman said, adding his players may have tried for one more pass too many on attack.

Canada will next face Croatia on Sunday and finishes group-stage play next Thursday against Morocco.

Belgium beats Canada 1-0 in its first game of FIFA men's World Cup
Canada put on a show in its return to the men's World Cup after a 36-year absence but failed to convert its chances in a valiant 1-0 loss to Belgium on Wednesday in Doha, Qatar.

The loud and proud Canadian contingent in the crowd of 40,432 at Ahmad Bin Ali Stadium loved it. Clad in red and waving Maple Leafs, they roared at every name during the introduction of the Canadian starting lineup and coach John Herdman.

It was a goosebumps-giving reception worthy of such a long wait. The road to Qatar has been filled with 36 years of frustration.

Previous World Cup qualification campaigns have foundered under the sun on a cricket oval in Port Of Spain, Trinidad, and the sweltering heat of San Pedro Sula, Honduras, among other locales. Canada was not to be denied this time, with the knowledge a home World Cup awaits in 2026. 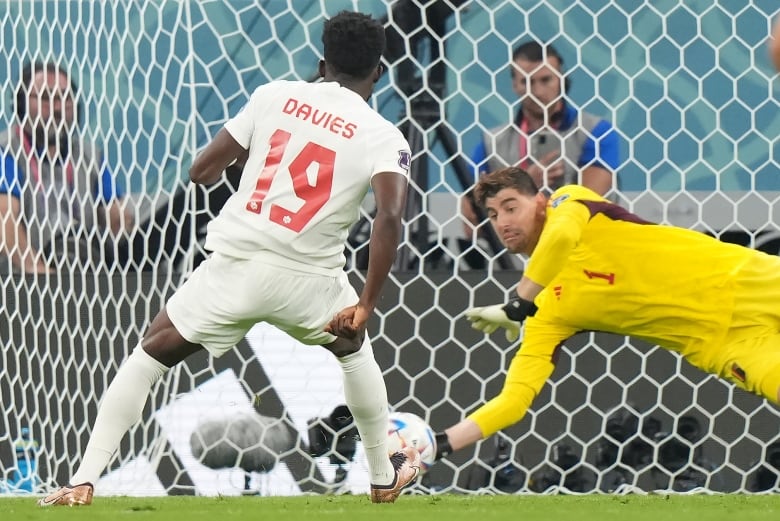 Courtois makes a save on a penalty kick from Davies during the first half. (Nathan Denette/The Canadian Press)

As promised, Herdman was able to field his strongest lineup with injury concerns Davies, Borjan and Stephen Eustaquio all in the starting 11.

Borjan was in goal behind a back three of Miller, Vitoria and Alistair Johnston. The midfield was Davies, Eustaquio, captain Atiba Hutchinson and Laryea, with Junior Hoilett, Jonathan David and Tajon Buchanan up front.

An errant Johnston pass led to a deflected Batshuayi shot in the first minute that went straight at Borjan. But the Canadians came right back and attacked to the chants of "Canada, Canada."

David almost connected on a Buchanan cross in the seventh. Buchanan forced a save from Courtois off the ensuing corner, with the Canadian player pleading for handball. 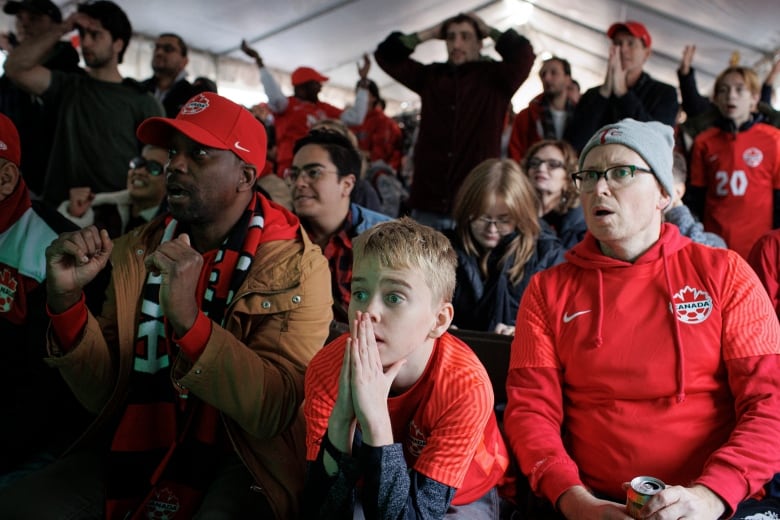 Fans react to the match against Belgium at a watch party at Cafe Diplomatico in Toronto on Wednesday. (Evan Mitsui/CBC)

After video review, Zambian referee Janny Sikazwe pointed to the spot. But Davies' penalty was too close to Courtois as he dove to his right.

The six-foot-six Real Madrid goalkeeper is the current holder of the Yashin Trophy as the world's best 'keeper.

Courtois had to make a kick save in the 13th minute as Canada kept pressing. Belgium began to work its way back in the game around the 20-minute mark but still found itself having to defend, with Courtois having to punch away a Johnston shot in the 23rd.

"This is our house," chanted the Canadians in the crowd.

Laryea went down in the box in the 38th minute, prompting a fruitless video review.

In the second half, the Canadians attacked the end where most of their fans were and David came close with a header that flashed just wide.

Herdman moved Davies up front and brought on Cyle Larin and Ismael Kone in the 58th minute. Five minutes later, Buchanan ballooned a shot behind the Belgian goal.

Sam Adekugbe came on for Canada in the 73rd. Three minutes later, a dancing Buchanan found Larin in the box, but the ball squibbed off his foot. Larin then had a chance that went straight at Courtois.

Jonathan Osorio and Liam Millar off the bench in the 81st minute were Herdman's last roll of the dice. Davies and Johnston, for felling a Belgian, earned late yellow cards for Canada. 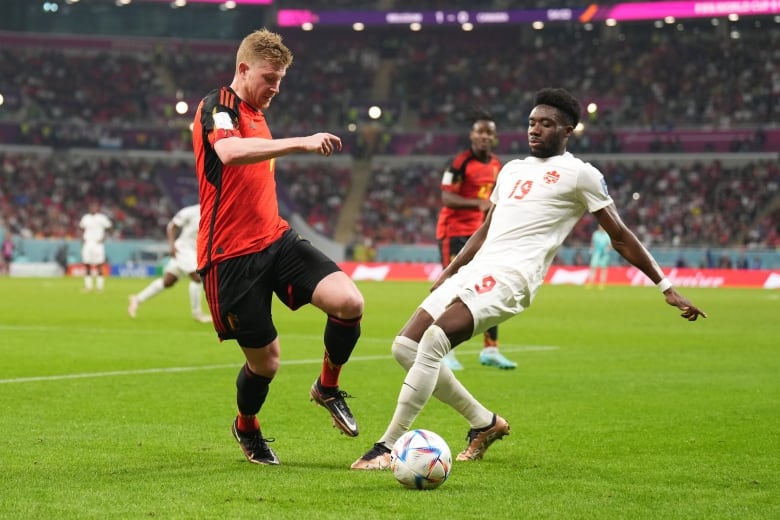 Davies plays the ball in front of Belgium midfielder Kevin De Bruyne during the second half. (Nathan Denette/The Canadian Press)

Hutchinson, born in February 1983, is the only player in the current Canada roster who was alive during the 1986 World Cup. At 39, he is the oldest outfield player at the Qatar tournament.

Herdman, who was 10 when the Mexico World Cup kicked off, becomes the first person to coach a team at both the men's and women's FIFA World Cup. Herdman, who coached both New Zealand and Canada previously at the Women's World Cup, came into Wednesday's game with a 32-10-5 record at the Canadian men's helm.

In kicking off at 10 p.m. local time at the impressive 40,000-capacity Ahmad Bin Ali Stadium, the Canadians escaped the heat. It was around 21 degrees Celsius at kickoff, with air conditioning cooling the venue despite the circular opening in the roof.

The Belgians were without injured star striker Romelu Lukaku, who has 68 goals in 102 appearances for the Red Devils. Captain Eden Hazard, meanwhile, has made just six appearances for Real Madrid this season.

The Canadians were hoping to use their pace to attack the left side of the Belgian back three in the 35-year-old Jan Vertonghen and 33-year-old Alderweireld. 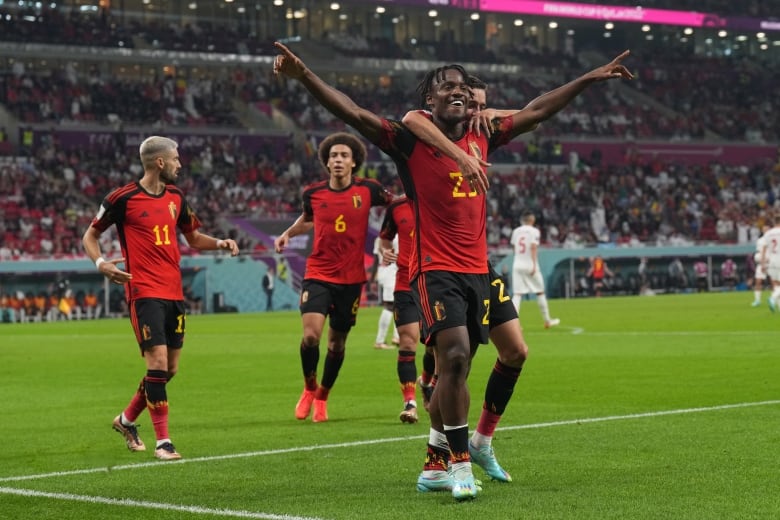 In facing an opponent as tough as Belgium, Canada was reliving the 1986 tournament when it opened against European champion France. The Canadians proved to be a tough out that day, eventually losing 1-0 on a 79th-minute Jean-Pierre Papin goal.

Canada subsequently lost 2-0 to both Hungary and the Soviet Union, exiting after the first round.

Belgium came into the game having not lost its opening match in its last six World Cup appearances (4-0-2). The last time it lost its opener was in 1986, beaten 2-1 by Mexico.

Belgium, which is making its 14th appearance at the World Cup, finished third four years ago in Russia and was a quarter-finalist in 2018 in Brazil.

The Belgians were ranked No. 1 in the world from October 2018, when they dislodged France, until March 2022 when Brazil took over top spot.

Canada and Belgium had met just once before, with the Belgians winning 2-0 in Ottawa in June 1989.

Wednesday's game was at a virtually brand new venue lit up by neon renditions of the Canadian and Belgian flags on the exterior. Ahmad Bin Ali Stadium, some 20 kilometres west of Doha, was inaugurated in December 2020.