Home Prime Minister Justin Trudeau Economists warn Trudeau and his cabinet that the economy is set to ...

Economists warn Trudeau and his cabinet that the economy is set to ...

On the second day of the federal cabinet retreat, Prime Minister Justin Trudeau and his ministers heard from a trio of economists who came bearing grim news about Canada's economic outlook.

The economy is expected to weaken considerably, unemployment will tick up and inflationary pressures may not ease as quickly as hoped, the economists — Kevin Milligan of the University of British Columbia, Carolyn Wilkins of Princeton University and Anil Arora of Statistics Canada — told a morning session of cabinet.

"There are some serious risks for the next year," Milligan told reporters after meeting with Trudeau and other ministers in Hamilton.

"The most likely scenario is that we hit a soft spot. We ought to be aware of those short-run challenges."

Milligan said "policymakers should keep that in mind" before they commit to any major new expenditures — spending that could blow a big hole through the federal budget at a time when the economy is shaky.

Ottawa is considering some new spending, including a sizeable increase to the Canada Health Transfer (CHT) to help prop up a health-care system that is facing a litany of challenges.

As part of the NDP-Liberal supply and confidence agreement, the government also has agreed to stand up some sort of national pharmacare program by year's end — a policy that likely would cost the federal treasury billions of dollars.

"I would say we can expect the economy to slow significantly, the unemployment rate will rise. Whether or not we have a hard landing is something no one really knows but I wouldn't rule it out in any good plan," said Wilkins. 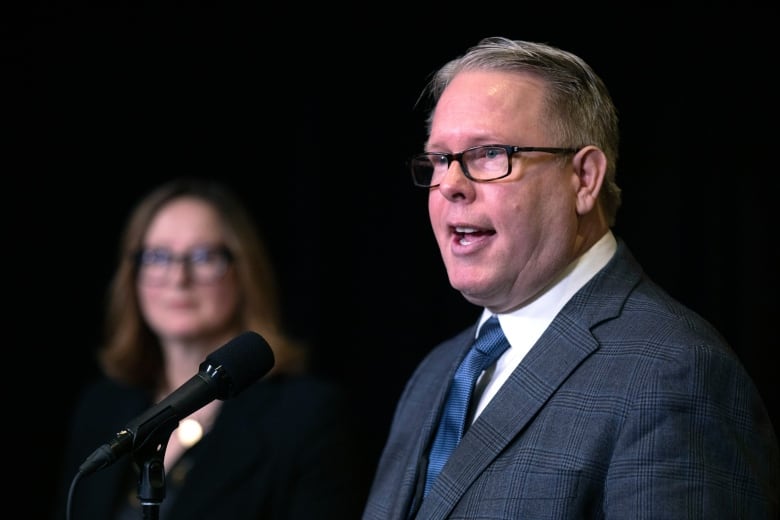 Kevin Milligan, professor of economics at the University of British Columbia, speaks to the media at the Hamilton Convention Centre, in Hamilton, Ont., during the second day of meetings at the Liberal Cabinet retreat on January 24, 2023. (Nick Iwanyshyn/Canadian Press)

A "hard landing" means a marked economic slowdown or sharp downturn following a period of rapid growth. Policymakers and central bankers have been trying to orchestrate a "soft landing," a cyclical slowdown in economic growth that avoids a recession.

If unemployment spikes, however, that could actually alleviate inflation, Wilkins said.

With the job market so tight, wages have grown considerably — which in turn are pushing up prices.

If there's some slack in employment, that might put some downward pressure on the cost of services, Wilkins said. That could help the inflation picture overall, as higher service costs have proven to be "stickier" than the price of hard goods, she added.

A slumping economy could weaken Ottawa's fiscal health, further pushing up the multi-billion dollar deficit and piling on more debt. The national debt increased from $628.9 billion in 2015 to $1.1 trillion in 2022.

An ambitious stimulus package to prop up a faltering economy could, in turn, juice inflation, which is already at a level not seen in decades.

Finance Minister Chrystia Freeland said Tuesday that, with the outlook gloomy, the government must act prudently.

If tax revenues take a dive, the government will do less, she said.

There's also a lot of global uncertainty, Freeland said, which compels Ottawa to proceed with caution.

She pointed to China's decision to dump its "zero COVID" policy, which could lead to strong economic growth in that part of the world as restrictions are relaxed.

But runaway growth in China is a double-edged sword because it could push up global energy prices as the country consumes more oil and gas — a development that could have ramifications for other industrialized economies.

There's one budget item the government says it will deliver, despite the economic headwinds: more health-care funding for the provinces and territories.

Freeland said the government is "committed to doing our share" on health and promised to be "faithful" to the party's 2021 election platform commitments, which included a pledge to hire 7,500 doctors and nurses, improve long-term care homes, make mental health services more readily available and hire tens of thousands of personal support workers (PSWs).

MP Randy Boissonnault, Canada's associate finance minister, conceded Tuesday that it's going to be a "turbulent" year for the economy. He insisted the government still has some spending room for big priorities.

"There's a lot of uncertainty so we're going to be watching this every step of the way as we get ready for the budget," Boissonault said.

He said Ottawa is still prepared to do "big ticket items" in a "responsible way."

Asked whether a multi-billion dollar boost to health transfers could put Canada on shaky fiscal ground, Milligan said it's likely the money will be doled out over the long-term, meaning the budget hit will not be as pronounced in any one year.

On Monday, a joint report from the Business Council of Canada and Bennett Jones warned that the fiscal forecast laid out in the last federal budget and the fall economic statement was probably too rosy.

The report, written by former Bank of Canada governor David Dodge and former Liberal finance policy adviser Robert Asselin, said the government's forecast was based on a "plausible but optimistic" set of economic and interest-rate assumptions that are unlikely to come true.

They warn there is a "high likelihood of a more severe recession" this year and that the Liberal promises on everything from health-care funding and enhanced national defence spending to infrastructure improvements and climate change are going to cost a lot more than projected.

Boissonnault said that report is one of many the government will look to as it makes its economic forecast ahead of the next budget.

He said he thinks the fiscal reality will fall somewhere between the best- and worst-case scenarios laid out in Freeland's fall economic statement.

That fiscal update forecast a deficit of $36.4 billion for the 2023-24 fiscal year. There's a risk that deficit projection might never materialize — it could end up much worse.

In the November fiscal update, Freeland presented what she called a "downside scenario" for growth and employment — one in which a recession results in thousands of lost jobs, fewer taxes collected, a spike in employment insurance (EI) payments, an increase in debt servicing costs and a dramatically higher deficit — $49.1 billion in 2022-23.