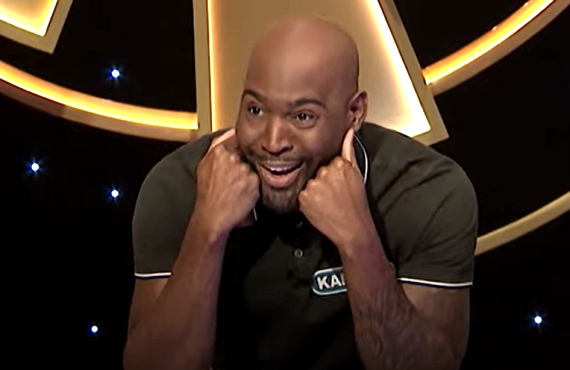 You may want to shout at Karamo Brown in this clip from Celebrity Wheel of Fortune, but he did plenty of shouting at himself as he tried to push through a paralyzing brain fart to solve a puzzle that everybody else in the building and most everyone at home had already figured out.

Brown had the entire puzzle except for two letters, and when he finally crapped out and had to pass to Patton Oswalt for the win, he kicked himself for not being able to figure out the word "discussing" since, in his words, "all I do is talk for a living!"

Even Oswalt said "I feel awful right now! I feel so bad! I just took food from people!"  Host Pat Sajak made sure to remind them that the charities they were playing for "are all good causes."

People are talking about Celebrity Wheel of Fortune in our forums. Join the conversation.

Andy Hunsaker has a head full of sitcom gags and nerd-genre lore, and can be followed @AndyHunsaker if you're into that sort of thing.