CTV Toronto
Share on FacebookShare Share on TwitterTweet
The Ontario Line subway being built by the province is now scheduled to arrive three years later than originally envisioned and with slightly scaled down capacity and frequency. 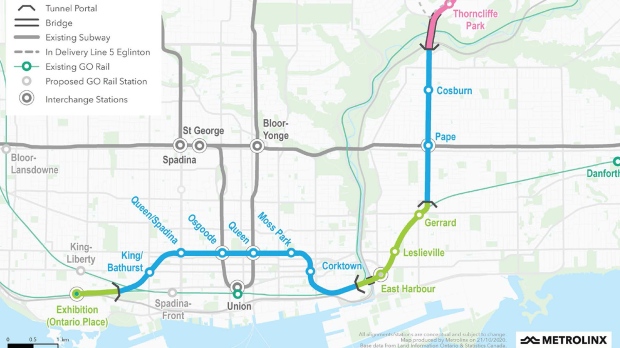 TORONTO -- The Ontario Line subway being built by the province is now scheduled to arrive three years later than originally envisioned and with slightly scaled down capacity and frequency out the gate.

On Thursday, the province released a preliminary design business case for the Ontario Line, along with two requests for proposals to design, build, finance, operate and maintain the line.

The document suggests that the line will now be completed in 2030, three years later than the 2027 projection suggested by the province when it took over the downtown relief line project from the city with the “Building Transit Faster Act.”

The document also suggests that trains may run less frequently and at lower capacity than originally thought.

According to Metrolinx, the service level timeline in the refined model still meets the original targets, but accounts for growing ridership over time.

The refined concept for the plan also shaves about $180 million off the capital costs of the project ($8.42 billion vs. an original estimate of $8.6 billion) as well as $150 million from estimated operating costs ($2.13 billion vs. $2.28 billion).

The province is continuing to seek 40 per cent of the capital costs from the federal governments, though Ottawa has not committed to it so far.

Speaking with reporters, Mayor John Tory said that while he is concerned about any delays, the plan remains a good one and there are ongoing discussions about how to mitigate delays.

“The Ontario Line let's remember will provide substantially enhanced service beyond what the relief line would have done,” Tory said. “We were ready to go with the relief line but we're now going to get a line that's going to serve more people in more places across the city and that's a good thing.

“With respect to the timetable I don't like to see any of these timetables slip and I can tell you there are discussions that go on every day as to ways in which we can try and take any apparent lost time and make up for it. And I can assure you, that's the case with the entire line.”

The province envisions the Ontario Line as a 15-station route offering a travel time of between 26 and 30 minutes from Exhibition Place to Ontario Place, reaching some of Toronto’s most underserved communities when it comes to transit. Part of the line will be buried, while part of its will be above-ground.

The line will include stations at King and Bathurst streets, Spadina Avenue and Queen Street, Moss Park, Leslieville, Thorncliffe Park and Flemingdon Park and will offer interchanges with Toronto’s existing subway system and with GO Train services.

The province said Thursday that infrastructure Ontario is now accepting request for proposal bids for two tracks of the project.

The first involves designing, building, financing, operating and maintaining the subway trains, communications and train control systems, a maintenance and storage facility, and the fare equipment that will be integrated with the PRESTO system.

The second track involves designing, building and financing the tunnels and transit stations for the southern segment of the line from Exhibition Place to just west of the Don River. It also includes utility and conduit work and building structures to prepare for track installation.

"By issuing these first Ontario Line RFPs, Premier Ford's vision for a world-class regional transit system continues to make steady progress," Transportation Minister Caroline Mulroney said in a statement. “The COVID-19 pandemic has had a devastating impact on our economy, and major transit projects like this will contribute significantly to our recovery by stimulating future growth and job creation."

The province also expects the line to generate $1.05 in socio-economic benefit for every $1 invested into it. It says construction of the project will support 4,700 jobs in Toronto through 2030, as well as an unspecified number of jobs related to maintenance of the line afterward.

Construction of the line is now scheduled begin in 2023.

The province projects that by 2041, the line could handle up to 388,000 trips per day and that a quarter of a million people could live within a 10-minute walking distance from one of its stops.