Raiders QB Marcus Mariota Earned $825,000 After Taking Over vs. Chargers

Sports Illustrated
Share on FacebookShare Share on TwitterTweet
There’s always an asterisk with NFL contracts but Marcus Mariota’s play against the Chargers could result in a big payday. 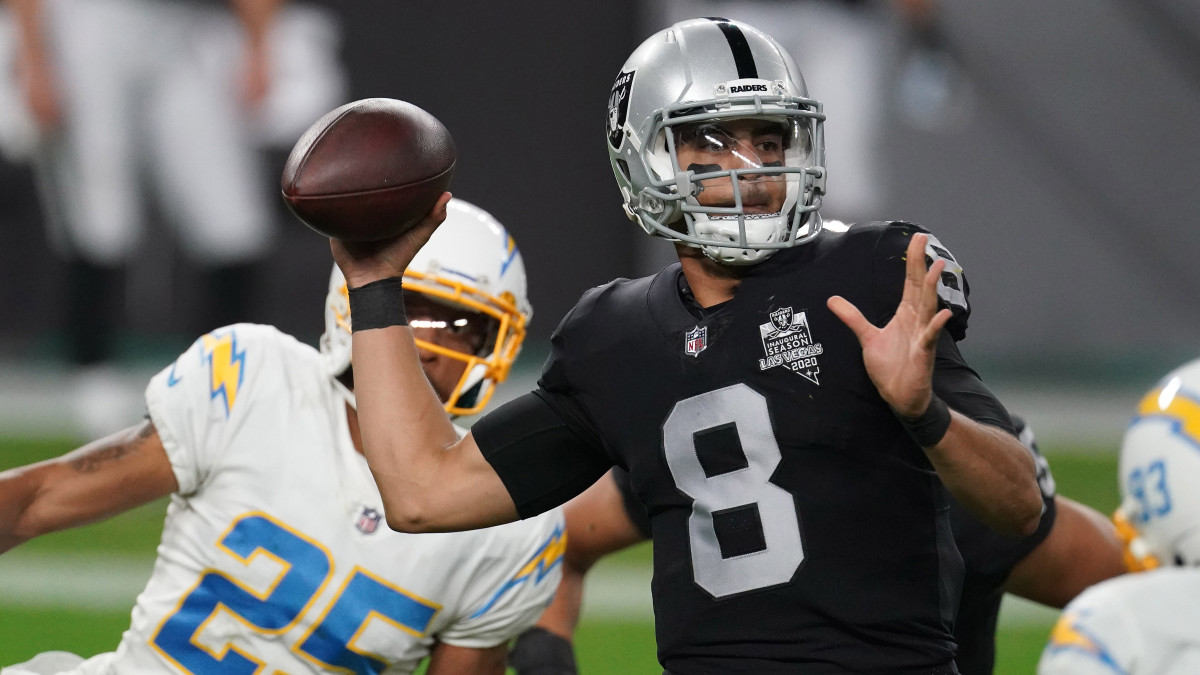 Not bad for a night’s work

There’s always an asterisk with NFL contracts but Marcus Mariota’s play against the Chargers could result in a big payday.

The Raiders were forced to turn to Mariota when Derek Carr injured his groin on the second Las Vegas series of the game. It was Mariota’s first action of the season and his first opportunity to earn some of the bonuses included in his incentive-laden contract.

Mariota ended up playing 86% of the snaps, so he could have earned $950,000 if the Raiders had won. The Chargers came out on top, despite their best efforts to give the game away, so Mariota earned $825,000 in bonuses.

There’s a catch, though. It’s possible that Mariota doesn’t see the additional $625,000 that was tacked on to his 2021 salary. His pay for next season isn’t guaranteed and the Raiders can save more than $10 million on their salary cap if Mariota isn’t with the team. That’s a lot of money to pay a backup quarterback but Mariota showed on Thursday that he’s the best backup in the NFL, so the team could decide it’s worth it to have him behind Carr, in which case Mariota keeps the $625,000.

There’s another way Mariota could keep that money, too. His performance against the Chargers definitely could have convinced other teams that he’s capable of being a perfectly reliable starter. If the Raiders trade him, they don’t even have to eat any dead money on their cap. Could a team with a hole at quarterback deal for him? Maybe a team that drafts a QB next spring will want to bring Mariota in to play the Ryan Fitzpatrick role.

Mariota probably isn’t done cashing in this year, either. Jon Gruden said after the game that Carr’s groin injury is “significant.” That lines up Mariota to start at least one more game and earn at least another $200,000. Not a bad deal.

The best of SI

A James Harden trade is inevitable but it could get ugly in Houston before he’s dealt. ... What should Cleveland’s new nickname be? ... Robert Lewandowski, just named the best soccer player in the world, could have ended up at a middling English club instead of one of Germany’s biggest, if not for a volcanic eruption. ... The ACC has played all its cards right this season and it could mean the conference gets two teams into the playoff.

Around the sports world

Houston men's basketball coach Kelvin Sampson says his entire roster has been diagnosed with COVID-19 since the summer. ... Henrik Lundqvist won’t be able to play for the Capitals this season after being diagnosed with a heart condition. ... Vanessa Bryant is accusing her mother of trying to extort her with a $5 million lawsuit. ... Jarvis Landry says Marcus Peters is a “coward” for spitting on him. ... Aloha Stadium, home of Hawaii football and the former home of the Pro Bowl, has been deemed unsafe for crowds and is expected to be condemned.

Getting laughed at is the most humiliating reaction to trying to start a fight Flawless throw from Mariota here If you look closely at Waller in the clip above, you can see him signal “34” with his fingers in honor of his former Ravens teammate Lorenzo Taliaferro, who died suddenly this week Hunter Renfrow missed the rest of the game with a concussion after this Justin Herbert screamed “I was in” after scoring the game-winning touchdown Whoopsie A player in a Texas state championship game let his teammate score what’s believed to be his first varsity touchdown Here’s really like a mini Tiger Too bad. This would have been a big game Get well soon! Excellent use of the video boards Not sports

Parts of upstate New York got as many as 41 inches of snow and the photos are ridiculous. .. Twitter is going to start verifying accounts again after a three-year hiatus. ... Jeremy Bulloch, who played Boba Fett in the original Star Wars movies, died at age 75. ... Cyberpunk 2077 is such a disaster on PS4 that Sony is offering refunds and removing it from its online store.

Email dan.gartland@si.com with any feedback or follow me on Twitter for approximately one half-decent baseball joke per week. Bookmark this page to see previous editions of Hot Clicks and find the newest edition every day. By popular request I’ve made a Spotify playlist of the music featured here. Visit our Extra Mustard page throughout each day for more offbeat sports stories.