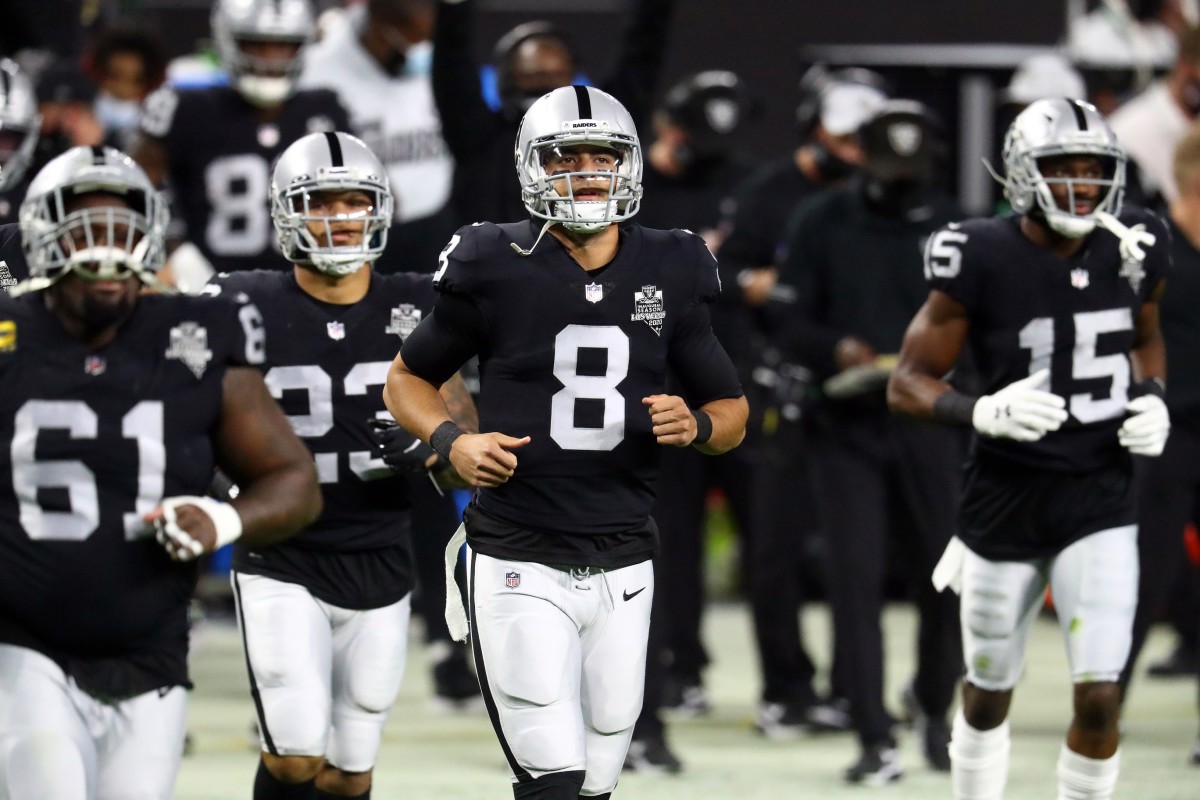 The former Tennessee Titans quarterback made his debut as a member of the Las Vegas Raiders Thursday when he replaced Derek Carr, who left with an injury in the final minute of the first quarter of an AFC West matchup with the Los Angeles Chargers.

Mariota promptly led a seven-play 86-yard touchdown drive that gave the Raiders a 10-7 lead with 9:19 to play in the second quarter. He was 3-3 passing for 70 yards and ran once for 11 yards on the possession. The final play was a 35-yard touchdown pass to tight end Darren Waller.

His entrance turned the contest into a matchup of former University of Oregon quarterbacks. Tennessee made Mariota the second overall choice in the 2015 NFL Draft after he won the Heisman Trophy at Oregon. Justin Herbert of the Chargers was the sixth overall pick this year.

Mariota and the Raiders came up short despite a 14-play, 70-yard drive at the start of overtime that ended Daniel Carlson’s 23-yard field goal with 3:18 remaining. The Chargers won it 30-27 on 1-yard sneak by Herbert with 1:29 to play.

Mariota finished 17-28 passing for 226 yards with one touchdown and one interception. He also was the game’s leading rusher with 88 yards (the second-highest total of his career) and one touchdown on nine carries.

It was the eighth time in his NFL career he had at least one touchdown passing and rushing in the same game.

It also was the most he had played in any game since his last start for the Titans, Oct. 13, 2019 at Denver.

In the second half, Mariota's 2-yard touchdown run capped a 19-play, 75-yard drive that took 10:52 off the clock. That was the Raiders' longest touchdown drive, in terms of time off the clock, in 13 years.

Carr left the game after he was sacked for a loss of three yards on third-and-goal from the 2 with 1:35 to play in the first quarter. At the end of the play, on which he scrambled toward the sideline, he began to hobble with what was reported as a groin injury.

Mariota came on at the start of Las Vegas’ next possession, which began at the Raiders’ 14-yard line with 13:29 to play in the second quarter. His first play was a handoff. His second was a 22-yard completion, after he ducked out of trouble to his left.

The Raiders scored on four of seven possessions with him under center but lost for the fourth time in five games and fell to 7-7 on the season.

Mariota opened the season on injured reserve with a strained pectoral muscle. He was not returned to the active roster until Oct. 20.

Carr played every snap in 12 of the Raiders’ first 13 games. The exception was when Nathan Peterman played 11 snaps in a blowout loss to the Atlanta Falcons on Nov. 29.

Mariota was the Titans’ starting quarterback for four-plus seasons before Ryan Tannehill replaced him after six games in 2019. He attempted just one pass the rest of that season.

He signed with the Raiders early in the offseason in a deal that made him the NFL’s highest-paid backup. Finally, Las Vegas got some of a return on that investment.