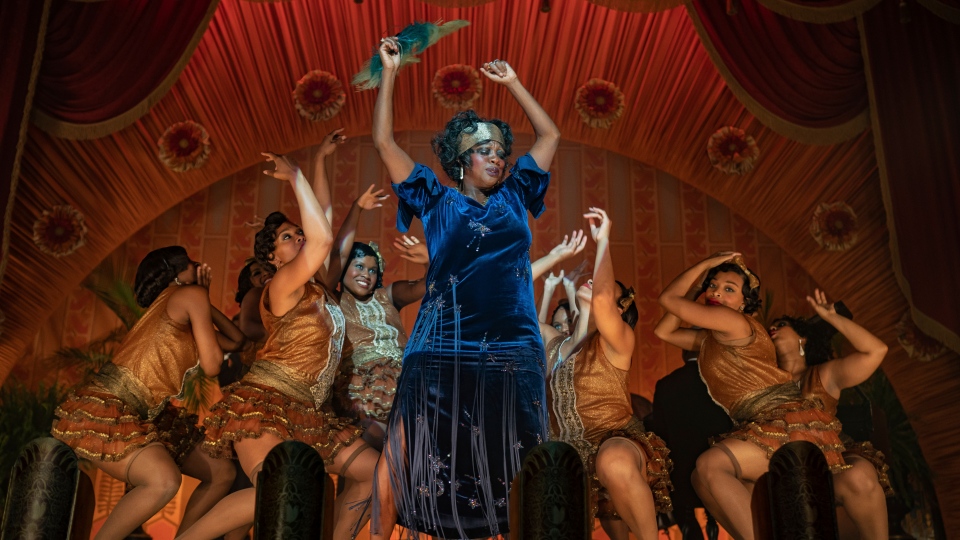 It’s hard not to watch “Ma Rainey’s Black Bottom,” the vibrant adaptation of August Wilson’s play of the same name, now streaming on Netflix, without feeling a sense of loss. It’s Chadwick Boseman’s last performance and the life he brings to the role of ambitious trumpet player Levee acts as a poignant reminder of a career cut tragically short.

Set in the roaring 1920’s Chicago, Viola Davis plays the titular character, a real-life musical trailblazer known as "Mother of the Blues." On a sweltering day in a dank basement recording studio, the band, pianist Toledo (Glynn Turman), trombonist Cutler (Colman Domingo), and string bassist Slow Drag (Michael Potts) and Levee, rehearse as they wait for the fashionably late Ma to arrive.

The heat, claustrophobia, frayed egos and twitchy Levee’s insistence on changing tried-and-true musical arrangements, fuel a war of words and wills as they attempt to put Ma’s signature “Black Bottom” song to disc.

“Ma Rainey’s Black Bottom” theatrical roots are very much on display in director George C. Wolfe (a five-time Tony winner) and screenwriter Ruben Santiago-Hudson’s adaptation. The presentation is energetic but simple; a showcase for the performances. Like bandleader Cutler says, “a-one, a-two, a-you know what to do.”

And they sure do. The core cast is uniformly excellent.

Domingo is understated but powerful as the bandleader, heading off interpersonal crisis with a few well-chosen words. Turman, recently seen as the stately Doctor Senator, consigliere to Chris Rock’s crime boss, on “Fargo,” is the sage of the group, gives Toledo’s monologues gravitas as he speaks of racial pride and personal sovereignty.

Davis is flamboyant, a diva who uses her demands to maintain control over her band and respect from her white producers (Jeremy Shamos and Jonny Coyne).

“They don’t care nothin’ about me,” she says. “All they want is my voice. I learned that and they are going to treat me the way I want to be treated no matter how much it hurts them.”

It’s a bravura performance that’s almost as loud and proud as the garish make up Ma has slathered on her face.

Ma Rainey’s name may be on the marquee but the most memorable character is Boseman’s Levee. Ambitious, he wants to leave behind the sideman gigs and form his own band, Levee Green and His Foot Stompers, but his bluster hides a deep well of pain that overflows during the steamy afternoon recording session.

Levee is a tragic character, a classically flawed man straining against the weight of personal trauma, hoping that his talent will bring him the respect he needs to survive. The distressing effects of racial discrimination are written large on Boseman’s expressive face, informing every twist and turn in his character’s journey.

It’s a skillful and heartbreaking performance that doesn’t just hint at his great talent, but lays it bare. It’s the kind of performance, filled with fury and frustration, that makes you hungry for more. Sadly, it’s his swan song.

Although set in the 1920s and written in the 1980s, the ideas and the anger in “Ma Rainey’s Black Bottom” feels of the moment and indispensable. The dialogue crackles and the context resonates because Wilson’s source material has not only stood the test of time, but transcends it. 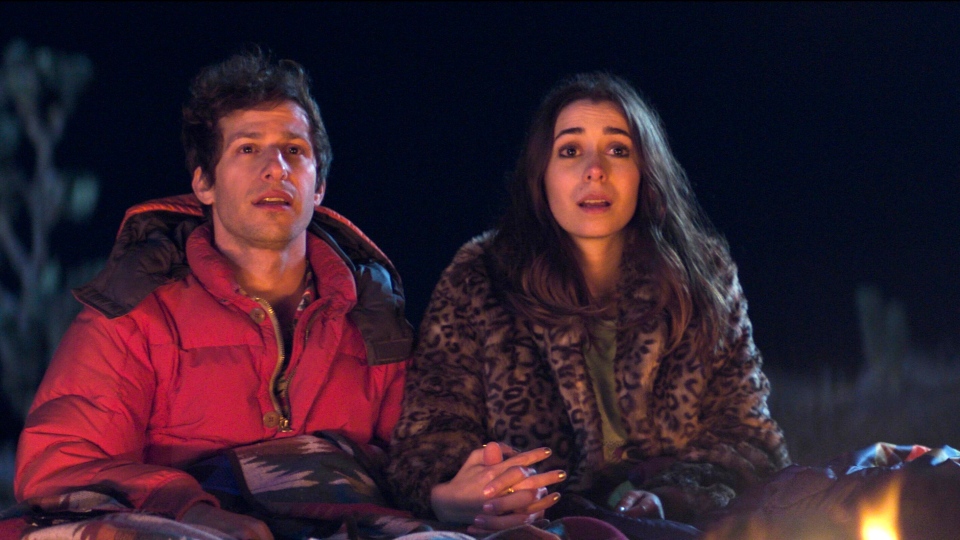 “Palm Springs,” the existential new Andy Samberg comedy now streaming on Amazon Prime Video, is a riff on “Groundhog Day.” But if the premise is familiar, the treatment isn’t.

When we first met Nyles (Samberg), he’s a nihilist.

“This is one of those infinite time-loop situations you might have heard about,” says Nyles. “It could be purgatory, a glitch in the system, whatever. The important thing is, the only way to live in it, is to embrace that nothing matters.”

His girlfriend Misty (Meredith Hagner) is a bridesmaid at the Palm Springs wedding of her childhood friend Tala’s (Camilia Mendes) and her beau Abe (Tyler Hoechlin).

It’s a stuffy affair, livened up only by Sarah (Cristin Milioti), the unlucky-in-love sister-of-the-bride. When Misty runs off with one of the groomsmen, Nyles sets his eyes on Sarah. They decamp to a private spot in the desert and just as they’re getting down to business, Nyles is impaled by an arrow shot by Roy (J. K. Simmons). Running to escape a second shot, Nyles ducks into a nearby cave but urges Sarah not to follow. Of course, she does and… cut to the next scene, she’s back in her hotel room getting ready for the wedding, caught in the same time loop as Nyles.

Confused, she confronts Nyles. As he explains the screwball situation, she immediately starts looking for a way out. It’s impossible, he tells her, describing how he once tried to escape, and made it to Equatorial Guinea but “still woke up back here.” He lives in the moment, spicing things up a bit from time to time, by hiding a bomb inside the wedding cake to amuse Sarah, knowing that every day will reset.

As romance blossoms between them they wonder, “How can their relationship possibly move forward if time is at a standstill?”

“Palm Springs” is a rom-com, but it isn’t so much about finding love as it is finding purpose.

Nyles and Sarah react to their situations very differently. He uses the endless repeat of his life as an excuse to do whatever strikes his fancy.

“I have felt everything I’ll ever feel,” he says, “so I’ll never feel anything again.”

He’s not malicious, he simply realizes that there are no consequences to his actions. She wants out, or, at the very least, to get something out of her life after years of being the black sheep of the family. Ultimately, the time loop makes both understand that a life lived without purpose is no life at all.

A great deal of the movie’s success comes from the casting. Samberg and Milioti have tremendous chemistry and bring out the best in one another. She blunts his jerky tendencies; he accentuates her vulnerability and steeliness. Without this sparkling combination the movie wouldn’t work nearly as well.

The time loop rom-com is a slim genre, but “Palm Springs” is a worthy addition. 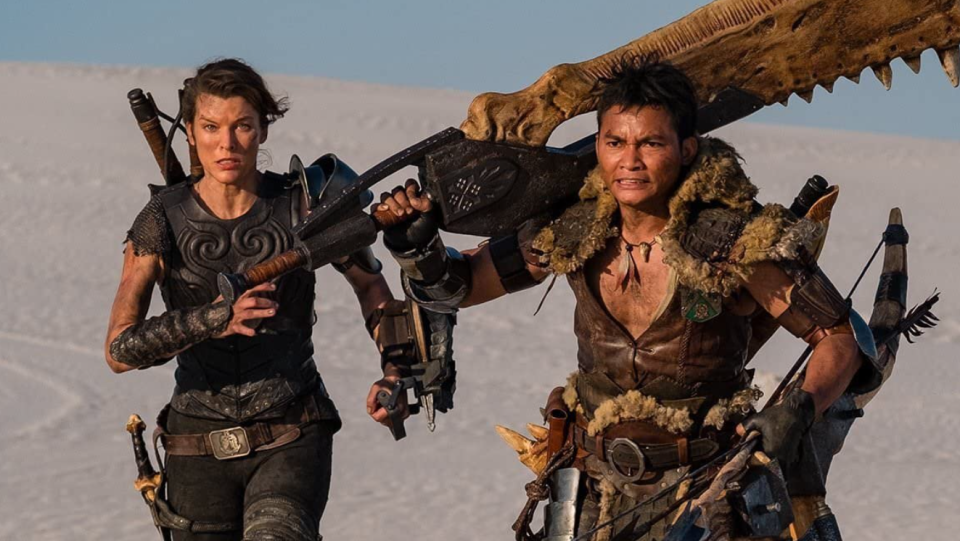 The plot is straightforward. Jovovich is Captain Natalie Artemis, a last name she happens to share with the Greek goddess of the hunt. When she and her team slip through a portal into a world teaming with monsters, she partners with The Hunter (Tony Jaa), a warrior who specializes in battling giant monsters. If she wants to survive and make it back to her world, he is her best hope.

Anderson’s previous movies are like heavy metal concerts, loud and proud, with the finesse of a sledge hammer and “Monster Hunter” is no different. It’s a simple story told with sweeping shots of the alien landscape, a turn-it-up-eleven sound mix and more CGI creatures than you can shake a gaming controller at. Don’t come here for story arcs or character development, those qualities are as absent as subtlety.

The action sequences are shot motion-sickness style, with the camera in constant movement, making it hard to see who is beating the stuffing out of who. It’s a shame because Jaa is one of the most agile and entertaining action stars this side of Jackie Chan in his prime, but much of the time here he is a blur of fists and fury.

“Monster Hunter’s” plot is so thin, if you held it up to the light, you could see right through it. But this isn’t “War and Peace.” Heck, it’s barely “See Spot Run” story wise. Instead, it’s more an excuse to slap together some jump scares and, admittedly cool-looking creatures, with elements borrowed from other movies like “Predator” and “Alien.”

2020 has been slim pickings for big off-the-wall action movies. “Monster Hunter” doesn’t offer much, but for anyone starved for no-nonsense—or should that be all nonsense? —pedal to the metal action, it just might do the trick. 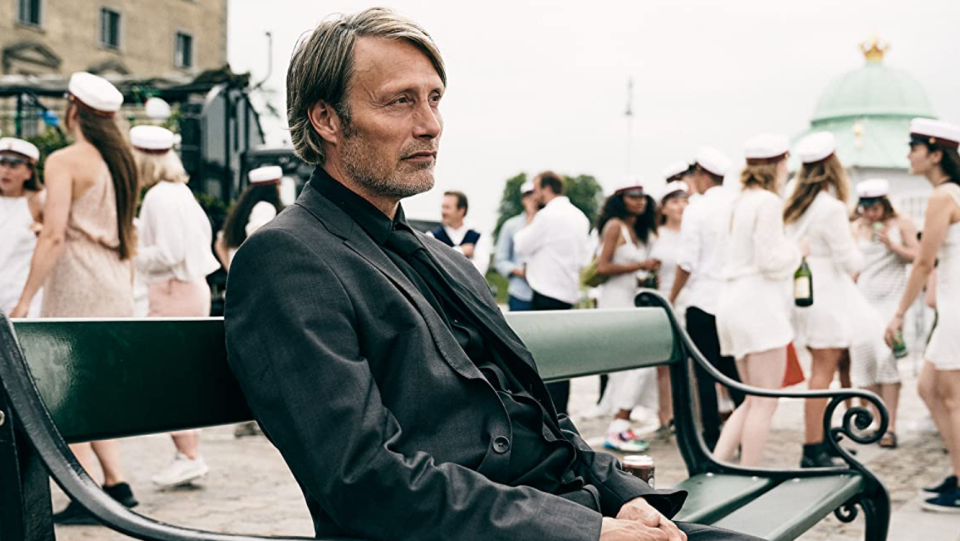 In Denmark the new Mads Mikkelsen mid-life crisis tragicomedy “Another Round,” now in select theatres and the Apple TV app and other VOD platforms, was released under the title “Druk,” which, according to Google translates means binge drinking. It’s an apt title for a film that essays the intoxicating idea of day drinking as a remedy for disillusionment.

Mikkelsen is Martin, a school teacher in a rut. He’s distracted in the classroom and also at home, where he goes through the motions of playing a happily married man. After a drunken night with three teachers from school, he finds he is not alone. His colleagues, Nikolaj (Magnus Millang), Peter (Lars Ranthe), and Tommy (Thomas Bo Larsen), struggle to remember why they get out of bed every day.

Their get up and go, it seems, got up and went.

To combat the shroud of ennui that envelopes all their lives, Nikolaj convinces them to take part in an impromptu experiment based on the work of Norwegian psychiatrist Finn Skårderud. The idea is to keep their blood alcohol levels at a minimum of .05 per cent at all times. The theory being that humans are generally more sociable, confident and agreeable with a low-level buzz. That means drinking wine for breakfast and guzzling “medicinal” shots during the day, but, like legendary daquiri downer Hemmingway, stopping intake at 8 pm to avoid hangovers at work.

At first their social experiment in antisocial drinking yields results. Armed with portable breathalyzers, flasks and brand-new attitudes, the four men see almost immediate changes. Martin comes alive in the classroom, lecturing like his life depends on it. Phys-Ed teacher Tommy inspires his team to a winning streak. The choir Peter conducts suddenly start singing with the voices of angles and Nikolaj takes control of his home life.

But when they decide to increase their daily dosage of drams, it turns out that too much of a good thing is just that, too much.

“Another Round,” in Danish with English subtitles, rides the line between glorifying the boozy legacies of Churchill, Hemingway, and Tchaikovsky, men whose genius was linked to their drinking, and wagging a finger at over indulgence. It lives somewhere in the middle, leaving it up to the viewer to judge the characters and their behaviour.

Strong lead performances with a minimum of Foster Brooks’ style “drunk” acting help shed some light on the dark story, even if no questions are answered. Predictable moments are mixed-and-matched with unexpected twists, leading up to an open-ended final scene that showcases Mikkelsen physical prowess. Once again, the movie leaves it to the viewer to decide what, exactly, is happening.

Director Thomas Vinterberg shapes “Another Round’s” absurd story into a portrait of middle age, not simply drunk middle agers. It’s an entertaining story of melancholy Danes and their hopes, dreams, and letdowns. It is sometimes celebratory, often cautionary and even surreal.