India vs Australia 1st Test: Australia Test jersey has a large sponsor logo in front for 1st time ever

India Today
Share on FacebookShare Share on TwitterTweet
In June, the International Cricket Council gave the cricket boards scope to recover some losses due to the Covid-19 pandemic by allowing them to sell the space on their shirt front. 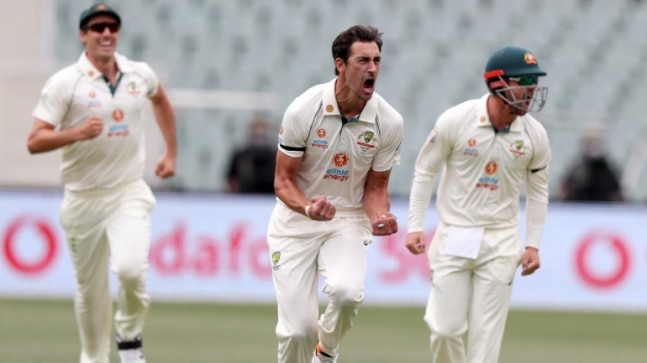 For the first time ever, the Australia Test jersey will feature a large sponsor logo across the front. The new look is set to be there for their summer this time around.

This is also likely to become a fixture of Test cricket in the year to come, as other teams such as England, the West Indies, Pakistan and New Zealand have all taken to this as well.

As cricket boards around the world struggled with a drop in revenue due to the Covid-19 pandemic, the International Cricket Council (ICC) gave them scope to recover some losses by allowing them to sell the space on their shirt front.

For Australia, the Australia A side that played the warm-up match against India at the Drummoyne Oval last week, were the first to wear the new Test shirts.

Three of the new-look shirts, signed by the entire Australian Test squad, will be auctioned to raise funds for Cricket Australia's charity partners, it was announced.

Earlier this year, the ICC took some interim measures designed to help the sport resume during the Covid-19 pandemic, such as the return of non-neutral umpires and banning the use of saliva to polish the ball.

The addition of the space in the front of the jersey was another step taken to earn some extra cash by the cricket boards.

Although the ICC had initially said that additional sponsorship branding would be allowed "through to the end of the 2020-21 season", but the governing body later decided to permanently implement this change.

It's the second major change to Test shirts in the past 18 months, following the addition of player names and numbers that were introduced to the back of shirts by the ICC in mid-2019.