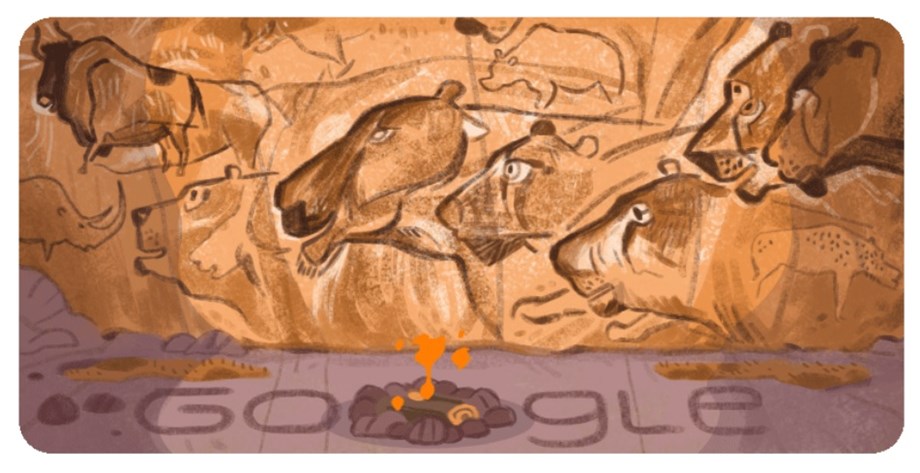 Google today celebrates the 26th anniversary of the Grotte Chauvet's discovery. Discovered on December 18, 1994, Grotte Chauvet or Chauvet Cave is considered one of the most significant prehistoric art sites and the UN's cultural agency UNESCO granted it World Heritage status on June 22, 2014.

Grotte Chauvet Cave contains some of the best-preserved figurative cave paintings in the world. It is located near the commune of Vallon-Pont-d'Arc on a limestone cliff above the former bed of the Ardèche River, in the Gorges de l'Ardèche.

The Chauvet-Pont-d'Arc Cave was first explored by a group of three speleologists: Eliette Brunel-Deschamps, Christian Hillaire, and Jean-Marie Chauvet for whom it was named six months after an aperture now known as Le Trou de Baba (Baba's Hole) was discovered by Michel Rosa (Baba).

Through carbon dating, the extraordinary drawings at Chauvet Cave have been traced back to the Aurignacian period over 30,000 years ago. Thanks to a rock fall that sealed the entrance more than 10,000 years later, the Chauvet Cave–and the more than 1,000 drawings documented on its limestone walls–then remained untouched, preserved for millennia in pristine quality.

The French archaeologist Jean Clottes revealed much about Chauvet Cave after further study. The dates have been a matter of dispute but a study published in 2012 supports placing the art in the Aurignacian period, approximately 32,000–30,000 years BP. A study published in 2016 using additional 88 radiocarbon dates showed two periods of habitation, one 37,000 to 33,500 years ago and the second from 31,000 to 28,000 years ago, with most of the black drawings dating to the earlier period.

Hundreds of animal paintings have been catalogued at the Chauvet Cave, depicting at least 13 different species, including some rarely or never found in other ice age paintings. The walls of Chauvet Cave feature many predatory animals, e.g., cave lions, leopards, bears, and cave hyenas. There are also paintings of rhinoceroses.

On the other hand, according to Jean Clottes, Chauvet Cave contains some of the oldest known cave paintings, based on radiocarbon dating of 'black from drawings, from torch marks and from the floors'. The paintings were created by people in the Aurignacian era, between 30,000 and 32,000 years ago – this was claimed by a group of scientists from the University of Savoy and Aix-Marseille University in a research article published in Proceedings of the National Academy of Sciences in May 2012.

In recognition of the site's vast significance to the human story, UNESCO inscribed the Chauvet Cave onto the World Heritage List in 2014.