Hot topics close
Home Finland Finland and Sweden want to join NATO. Here's how it works and what comes next

Finland and Sweden want to join NATO. Here's how it works and what comes next

CNN
Finland and Sweden are poised to end decades of neutrality by joining NATO, a dramatic evolution in European security and geopolitics sparked by Russia's invasion of Ukraine. Here's what you need to know about how it works and what comes next.
The two Nordic nations had long kept the military alliance at an arm's length, even while eying Russia to their east with caution.
But Moscow's assault on Ukraine has sparked renewed security concern across the region, and the leaders of each country have signaled their desire to join the bloc after more than 75 years of military non-alignment.
Here's what you need to know about how the war in Ukraine caused the shift, and what comes next.
What's happened so far?
Finnish leaders announced their intentions to join NATO on Thursday, and formally presented that desire at a press conference on Sunday.
In Sweden on Sunday, Prime Minister Magdalena Andersson announced during a press conference her party's support for the country to apply to join NATO.
The move must be approved by a vote in parliament in each country, but given the support of the ruling governments, that hurdle is expected to be passed comfortably.
"When we look at Russia, we see a very different kind of Russia today than we saw just a few months ago," Finnish Prime Minister Sanna Marin said Sunday. "Everything has changed when Russia attacked Ukraine. And I personally think that we cannot trust anymore there will be a peaceful future next to Russia."
Joining NATO is "an act of peace [so] that there will never again be war in Finland in the future," Marin said.
Her Swedish counterpart, Andersson, said Sunday: "For us Social Democrats, the military non-alliance policy has served us well. But our analysis shows that it will not serve us as well in the future. This is not a decision that we have taken lightly."
The announcements were met with support from leaders in almost all NATO nations. US Secretary of State Antony Blinken told reporters "the United States would strongly support the NATO application by either Sweden or Finland should they choose to formally apply to the alliance. We will respect whatever decision they make." 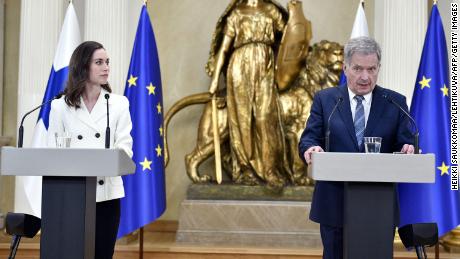 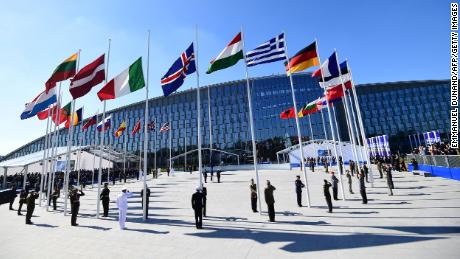 How has Russia reacted?
Russia lambasted the decision by Finland and Sweden. Its deputy Foreign Minister Sergei Ryabkov said Monday that the move would be a "mistake" with "far-reaching consequences," according to state news agency TASS.
That followed similar threats from high-ranking Moscow officials. Kremlin spokesperson Dmitry Peskov said that "NATO expansion does not make the world more stable and secure" after the announcement. He added that Russia's reaction would depend on "how far and how close to our borders the military infrastructure will move."
Russia currently shares about 755 miles of land border with five NATO members, according to the alliance. Finland's accession would mean that a nation with which Russia shares an 830-mile border would become formally militarily aligned with the United States.
The addition of Finland and Sweden would also benefit the alliance, which would frustrate Russia. Both are serious military powers, despite their small populations.
However, Bildt and Stubb, the former Swedish and Finnish premiers, believe that so far, Russia's response has been relatively muted.
"The Kremlin sees Finnish and Swedish NATO membership as a Nordic solution, and in that sense, not a radical threat," said Stubb. "We're not too worried."
Stubb and Bildt said they believe Moscow ultimately sees the two countries as reliable neighbors, despite their decision to join a Washington-backed alliance.
"The fact that Finland and Sweden are part of the West doesn't come as a surprise," said Bildt.
Why does Russia loathe NATO?
Russian President Vladimir Putin sees the alliance as a bulwark aimed at Russia, despite the fact that it had spent much of the post-Soviet years focusing on issues like terrorism and peacekeeping.
Before Putin invaded Ukraine, he made clear his belief that NATO had edged too close to Russia and should be stripped back to its borders of the 1990s, before some countries that either neighbor Russia or were ex-Soviet states joined the military alliance. 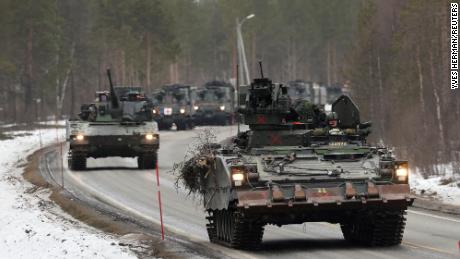 Ukraine's desire to join NATO, and its status as a NATO partner -- seen as a step on the way to eventual full membership -- was one of the numerous grievances Putin cited in an attempt to justify his country's invasion of its neighbor.
The irony is that the war in Ukraine has, effectively, given NATO a new purpose.
"Article 5 is back in the game, and people understand that we need NATO because of a potential Russian threat," Stubb said in an interview with CNN before the invasion.