CTV Toronto
Share on FacebookShare Share on TwitterTweet
The Ontario government has released its funding plan to meet an average four-hour care standard commitment in long-term care homes across the province. 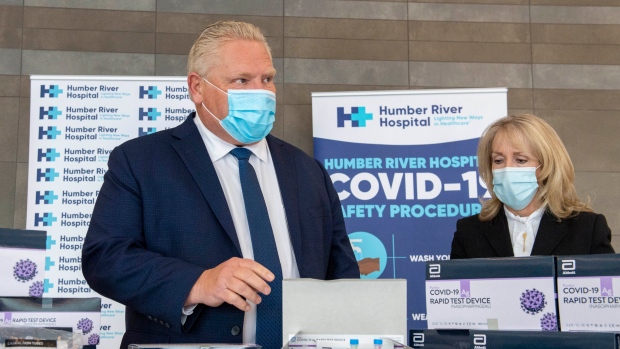 TORONTO -- The Ontario government has released its funding plan to meet an average four-hour care standard commitment in long-term care homes across the province.

Speaking at a news conference on Thursday, Premier Doug Ford said the province would be committing to $1.9 billion in funding annually by 2024-25 to create more than 27,000 new positions in the industry, including personal support workers, registered nurses and registered practical nurses.

Ford also said the government would be providing a 20 per cent increase in direct care time administered by other health-care professionals.

“Four hours a day is a trailblazer,” he said. “This could be a nation-leading level of care for our seniors, because they deserve nothing less.”

The announcement comes nearly two weeks after the province’s commission on COVID-19 in long-term care issued its second interim report recommending that the province conduct more proactive inspections of its facilities and follow up with harsher enforcement measures when homes fail to address concerns.

The same commission also said that Ontario must spend more money on the hiring of personal support workers and nurses.

The Ontario government called Thursday’s investment “historic” and said they will be launching consultations in January with sector partners on what regulatory changes need to be made to support the plan.

However, the official opposition is claiming the Progressive Conservatives should be shortening the timeline for the investment.

“Our parents and grandparents are in crisis. More are becoming infected every day and more are dying every day. Heartbreaking stories of neglect are still rampant, and 2,526 have tragically lost their lives,” New Democratic Party leader Andrea Horwath said in a statement.

“We need an emergency mobilization to add thousands of (personal support workers) to nursing homes right now. They cannot wait for 2025. This timeline is a disgusting example of Doug Ford doing nothing today in order to save money today — and our loved ones are paying the price for that choice.”

“The staffing crisis in long-term care has long plagued the sector,” Duncan said in a statement. “This new strategy recognizes it will take an expanded workforce and enhanced supports for staff to improve care for our long-term care residents – today and in the future.”

Duncan went on to say that she looks forward to seeing further strategies, including the use of on-site rapid testing, enhanced infection prevention and control measures, and ensuring adequate personal protective equipment.

The news also comes a few days after a paper published by the province’s COVID-19 science table called for the reduction of temporary staffing, saying that improving working conditions could help mitigate outbreaks at long-term care homes.

“The most important risk factors for the magnitude of an outbreak, and the number of resulting resident deaths are older design, chain ownership, and crowding,” the report said.

The paper said other measures that could be effective include is a community-tailored approach to prevent worker infections, de-crowding of homes, prioritizing workers for testing, and guaranteeing sick leave.

Of the province’s 626 long-term care facilities, 143 are currently experiencing an outbreak. At least two of those outbreaks were recorded in the last 24 hours.

Since the beginning of the pandemic, 2,526 long-term care residents in Ontario have died of COVID-19 representing more than 60 per cent of all deaths logged in the province.

With files from the Canadian Press