CHEK
Share on FacebookShare Share on TwitterTweet
British Columbia has reported 673 new cases of COVID-19 across the province in the last 24 hours with 4 linked to the Island Health region.

British Columbia has reported 673 new cases of COVID-19 across the province in the last 24 hours with 21 additional deaths in that span.

Of the 673 new cases, four are linked to the Island Health region and an additional death has been connected to the Saanich Peninsula Hospital outbreak.

There are currently 10,009 active cases in British Columbia, while 10,388 residents remain under active public health monitoring.

Dr. Bonnie Henry says that 358 are in hospital currently – a decrease of 4 from Wednesday – with 93 people in critical care as a result of the virus (increasing by two from Wednesday).

On Thursday, there were 21 additional deaths related to the virus for the second day in a row. This brings the provincial death total over the course of the pandemic to 713.

The total number of deaths in the province over the last seven days is 126.

Dr. Henry said that the majority of the 21 deaths announced today were elders or seniors in long-term care homes.

Island Health has also released on Thursday that one additional death has been connected to the outbreak at Saanich Peninsula Hospital, marking the facility’s third death since the outbreak began on Dec. 1.

Health officials say that there have been no new outbreaks declared at health facilities.

There are now 55 active outbreaks in long-term care and assisted living and six in acute care facilities.

According to officials, next week a data update will be provided to show some of the progress over the last month and where British Columbia is right now.

Island Health released on Thursday that there are now 76 active COVID-19 cases within the region.

Since the pandemic began, the Island Health region has 803 confirmed cases of COVID-19.

“On behalf of Island Health, I want to extend my deepest condolences to the family and friends of this person. We share your grief during this very sad and difficult time. To the Island Health team members who cared for this person, thank you,” said Island Health President and CEO Kathy MacNeil. 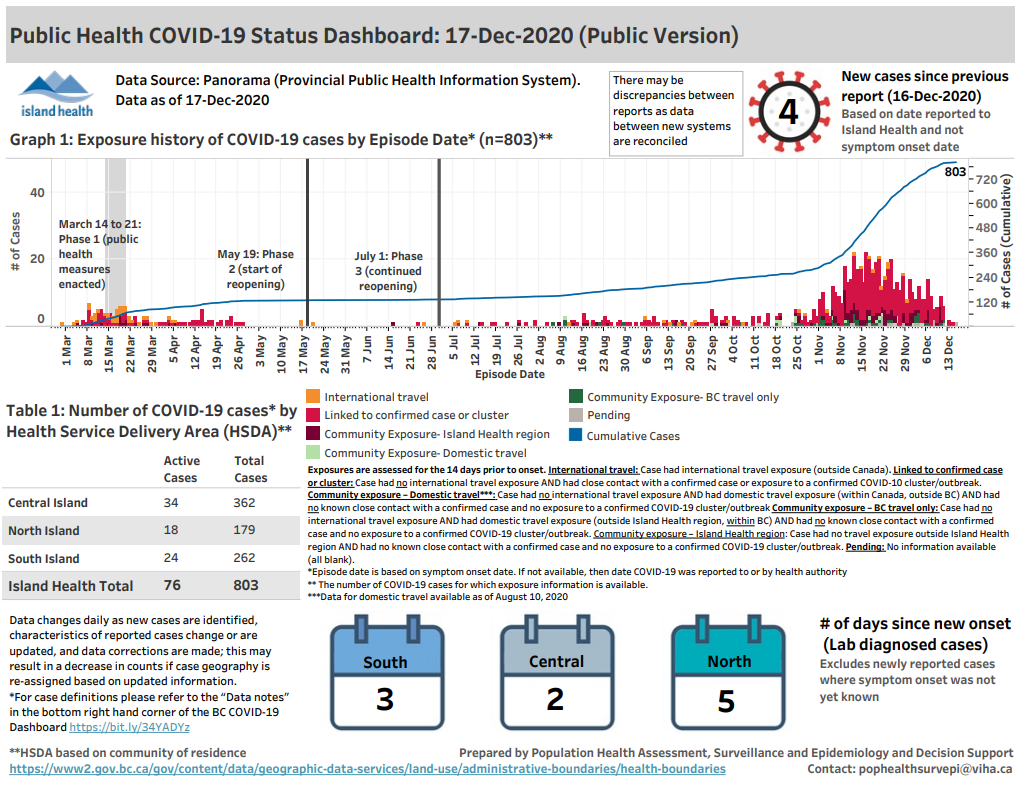 During a live press conference with Dr. Henry and Health Minister Adrian Dix, health officials clarified some details on why the vaccine isn’t recommended for immunocompromised people.

Dr. Henry says that some people with an underlying health condition or on certain medications may not respond to certain vaccines well.

This includes people who have had an organ transplant, chronic liver or kidney disease, someone receiving chemotherapy or certain immuno-suppressive therapies.

“If you are wondering if this applies to you, because it’s not all kinds of immune conditions, the best thing to do is to consult with your healthcare provider.”

The clinical trials of Pfizer’s vaccine also excluded people with these conditions and focused on primarily health populations and people of different ages.

Dr. Henry says with limited testing on immunocompromised people, “we just don’t know whether these vaccines will work and whether they are safe or will have some effects on the immune system.”

If there is a confirmed COVID-19 case in a school, public health contacts affected school community members directly. Regional health authorities also post-school notifications on their websites, providing the date and type of notification (outbreak, cluster or exposure) for impacted schools.

The Island Health school site can be found here.

Island Health’s COVID-19 data breaks down North, Central and South Island case counts and lists the number of days since any new lab-diagnosed cases. You can find the data here along with any public exposures.

According to data collected by Johns Hopkins University and Medicine, the number of confirmed COVID-19 cases worldwide is more than 74.8 million. More than 1.65 million deaths have been recorded.