Xinhua
Share on FacebookShare Share on TwitterTweet
BEIJING, Dec. 18 (Xinhua) -- As the year 2020 draws to an end, China's economy has cemented its significant recovery from the damage caused by the COVID-19 epidemic as key economic indicators point to a stabilizing growth trend and a steady rebound in"...

BEIJING, Dec. 18 (Xinhua) -- As the year 2020 draws to an end, China's economy has cemented its significant recovery from the damage caused by the COVID-19 epidemic as key economic indicators point to a stabilizing growth trend and a steady rebound in domestic demand.

The stronger-than-expected recovery has prompted some economists to raise their forecast for China's growth for 2021, and experts say the country's robust recovery will be a crucial stabilizer for the global economy.

The following is a timeline of key moments from the country's sustained recovery in the face of the unprecedented impact of COVID-19. 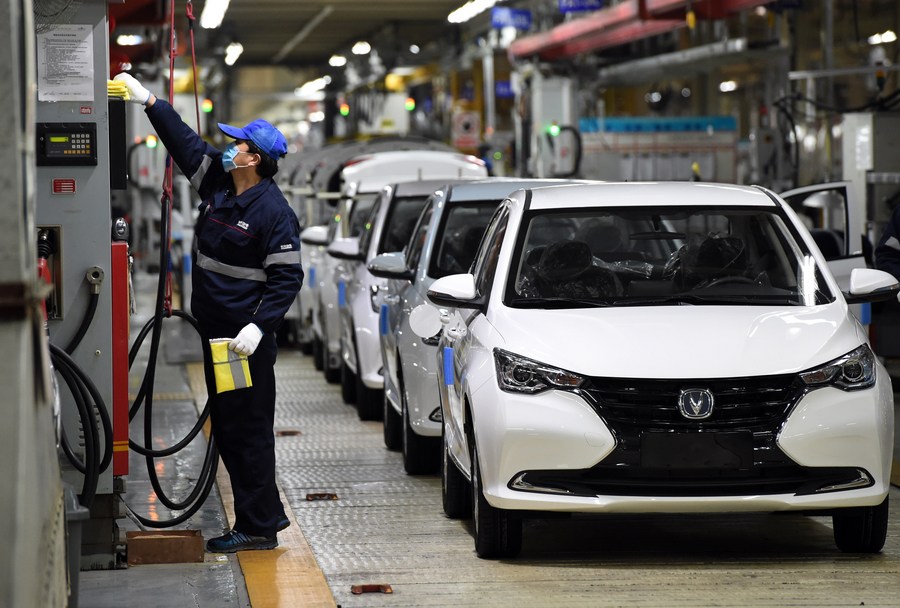 -- On April 13, data released by the China Construction Machinery Association showed that excavator sales, an important indicator of infrastructure development, hit a record high of 49,408 in March, up 11.6 percent year on year, as the novel coronavirus had been largely contained in China and production resumed in companies and factories at an accelerated pace.

-- On May 11, the China Association of Automobile Manufacturers said at an online press conference that the country's automobile market, which was hit hard due to the COVID-19 epidemic, started to recover in April, thanks to unleashed pent-up demand and encouraging policies, with sales rising 4.4 percent year on year. This ended a contraction streak over the previous 21 months.

-- On May 15, data from the National Bureau of Statistics (NBS) showed that China's value-added industrial output, an important economic indicator, recorded expansion for the first time since the COVID-19 outbreak as factory activities gradually recovered. Value-added industrial output went up 3.9 percent year on year in April, rebounding from the 1.1-percent drop in March and 13.5-percent slump in the first two months of the year.

-- On July 14, the General Administration of Customs (GAC) said China registered better-than-expected foreign trade performance in the first half of the year, with exports and imports rising in June, as the country's economic recovery gathered momentum amid the further containment of COVID-19.

The country saw foreign trade rise 5.1 percent year on year in June, with exports and imports up 4.3 percent and 6.2 percent, respectively. 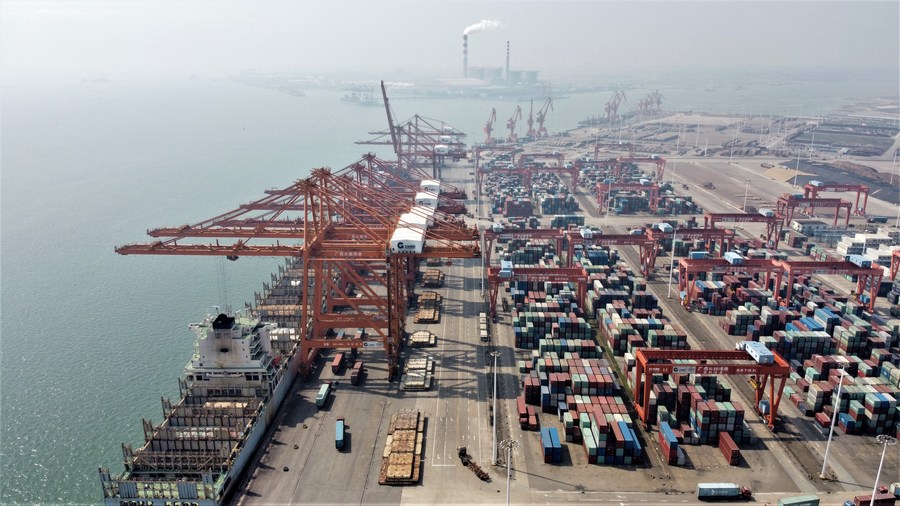 -- On July 16, the NBS announced that China's gross domestic product (GDP) expanded 3.2 percent year on year in the second quarter of 2020, bouncing back from the 6.8-percent contraction in the first quarter, as the country gradually resumed work and production after the COVID-19 epidemic was contained.

-- By Aug. 17, the maximum electrical load nationwide hit 1.08 billion kW, up 24 million kW from the highest level last year, reflecting the sound momentum of the economic recovery, according to the National Development and Reform Commission.

-- On Aug. 31, NBS data showed that the purchasing managers' index (PMI) for China's non-manufacturing sector stood at 55.2 in August, up from 54.2 in July. This was the sixth month in a row for the non-manufacturing PMI to be above 50, indicating improved domestic demand as the country's economic recovery continued to gather pace.

-- On Sept. 15, NBS data revealed that retail sales of consumer goods, a main gauge of China's consumption, grew for the first time this year, rising 0.5 percent year on year in August, in the latest sign that consumer spending was catching up with the country's wider economic recovery.

-- On Sept. 17, the central parity rate of the Chinese currency renminbi, or the yuan, extended gains to hit a new 16-month high against the U.S. dollar, providing evidence of the resilience and long-term prospects of the Chinese economy. 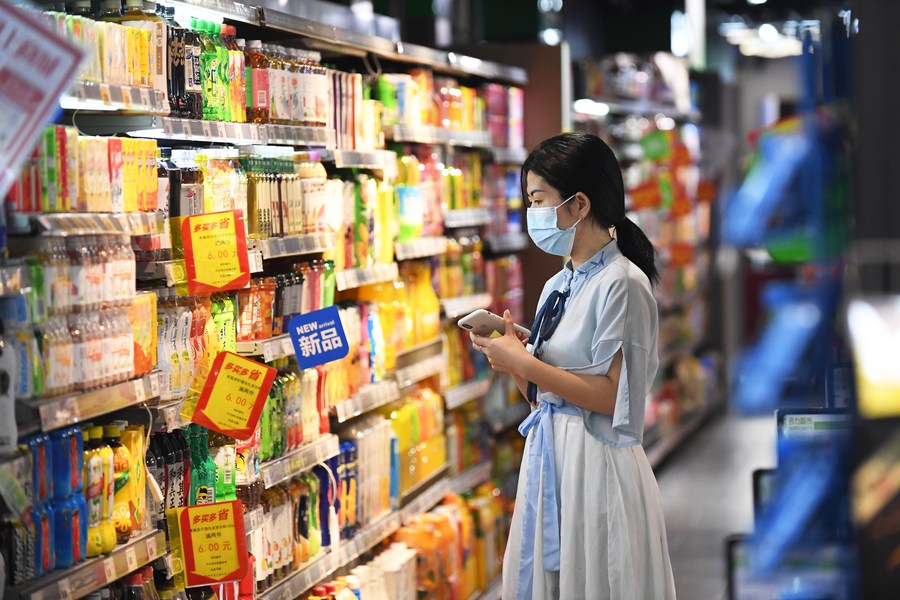 The yuan strengthened 150 pips to 6.7675 against the U.S. dollar, the strongest level since May 9, 2019, according to the China Foreign Exchange Trade System.

-- On Oct. 19, the NBS said China's GDP expanded 4.9 percent year on year in the third quarter of 2020, faster than the 3.2-percent growth in the second quarter and the 6.8-percent slump in the first quarter.

In the first three quarters, the country's GDP expanded 0.7 percent year on year, returning to growth after the 1.6-percent contraction in the first half of the year.

China's fixed-asset investment went up 0.8 percent year on year in the first three quarters, reversing a decline of 3.1 percent in the first half of this year, according to the NBS.

-- On Nov. 27, NBS statistics showed the profits of major industrial firms returned to positive growth for the first time this year, expanding 0.7 percent year on year to 5.01 trillion yuan (about 767.1 billion U.S. dollars) in the first 10 months and reversing the 2.4-percent decline in the January-September period. 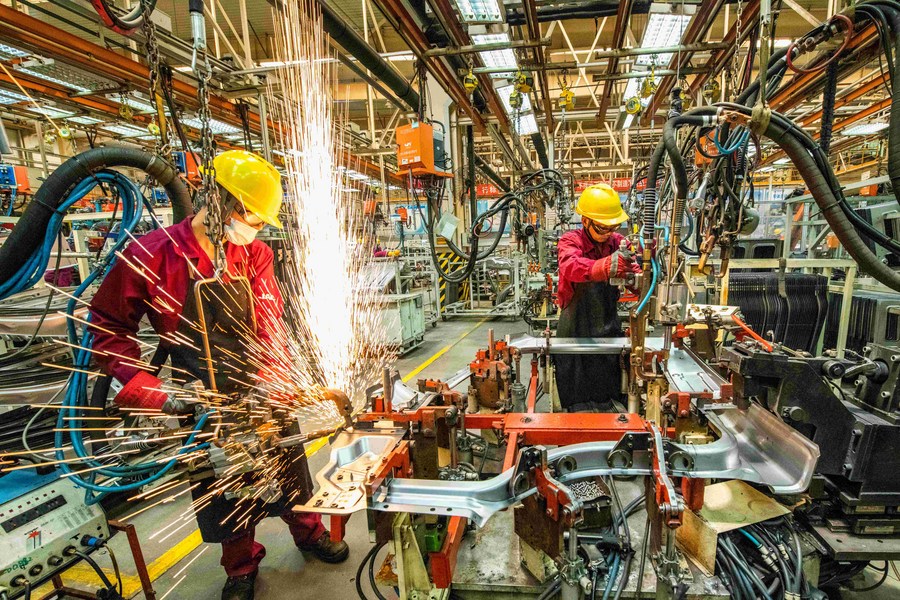 -- On Nov. 30, the NBS announced that the PMI for China's manufacturing sector came in at 52.1 in November, the highest seen this year, marking the ninth consecutive month of expansion.

-- On Dec. 7, data from the GAC showed that China's exports jumped by 21.1 percent year on year in November in U.S. dollar terms, the fastest growth since February 2018, thanks to strong demand for medical goods and electronics.

-- On Dec. 15, an NBS press conference revealed that China's fixed-asset investment by the private sector rose 0.2 percent during the January-November period, the first growth registered this year.

The unemployment rate has dropped for four months in a row, as the Chinese economy continues to strengthen its recovery from the COVID-19 slump.

A total of 10.99 million new urban jobs were created in the first 11 months, completing 122.1 percent of the target set for the whole year, according to the NBS. ■