Bo Levi Mitchell wants to be the one to help the Hamilton Tiger-Cats end the CFL's longest Grey Cup drought.

The Ticats signed the veteran quarterback to a three-year deal Tuesday, roughly two months after acquiring Mitchell's rights from the Calgary Stampeders.

Hamilton last won a Grey Cup in 1999 and, with this year's game slated for Tim Hortons Field on Nov. 19, Mitchell wants to deliver a championship for the franchise's fan base.

"I know what that feeling is like, and I don't want to be part of it again."

The source spoke on the condition of anonymity because Mitchell's contract figures weren't released.

"It's been a process but it's something we're excited about," said Orlondo Steinauer, Hamilton's head coach/president of football operations. "When we acquired the rights to Bo, you're not always sure how these things are going to end up but this day has finally arrived.

"This is a great day, but this day is not about me. It's about us."

Mitchell, 32, joined the Stampeders in 2012 and became their starting quarterback in 2014. He led the franchise to two Grey Cup titles while twice being named the league's outstanding player.

But the Texas native lost his starting job last season to youngster Jake Maier, who signed an extension through 2024 with Calgary during the '22 campaign. 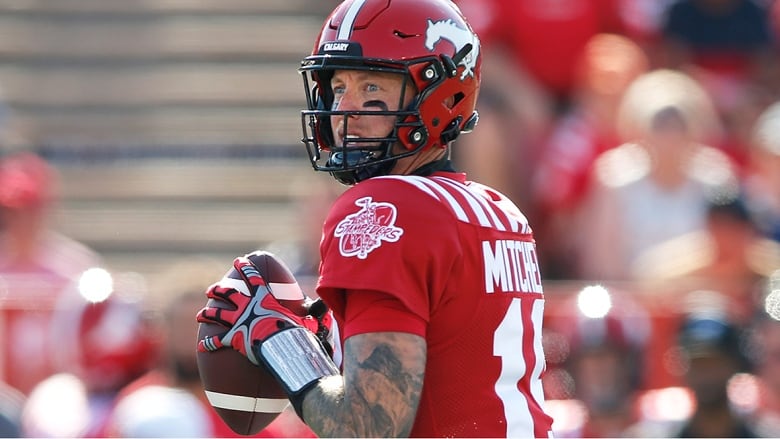 Quarterback Bo Levi Mitchell reportedly will be paid $500,000 annually on a three-year deal with the Tiger-Cats. The former Stampeders pivot is a two-time CFL all-star and the league's active leader with 32,541 passing yards. (Larry MacDougal/Canadian Press/File)

"It's nice to walk into the weight room and not feel like you have to do rehab."

'My mind is my strongest weapon'

Mitchell is never lacking confidence and often isn't shy about stating it. But a top priority now is winning over his new teammates.

"I'm boastful, I'm confident and yes, I am borderline cocky," he said. "I will let you know my physical went great [Tuesday morning] . . . but I can tell you my mind is my strongest weapon and mentally these are the moments I live for.

"I've wanted to walk into a different stadium, win a Grey Cup for a different team but it's all built in this locker room. I'm not going to do anything until I earn the respect of every single number and the name on the back of every single one of these jerseys. In order to do that I have to get out here and get to work."

Hamilton ended its season by losing 28-17 to the Montreal Alouettes in the East Division semifinal.

"We've had conversations [with Evans] since we acquired [Mitchell's] rights," Steinauer said. "Right now, Dane is a Hamilton Tiger-Cat and the next steps will be determined in the near future."

When Hamilton acquired Mitchell's rights, the quarterback publicly stated he wanted to hit free agency and test the waters. But Mitchell said that was before knowing the status of Steinauer as well as Tommy Condell and Mark Washington, Hamilton's offensive and defensive co-ordinators, respectively.

"I wanted to make sure the coaching staff was going to be intact," Mitchell said. "I think that gives us the best opportunity to win.

"Just from afar, this organization has done it right, they've been at the top a lot."

Mitchell is especially looking forward to working with Condell.

"Getting to talk to Tommy, he's on the same page as I am. We want to bring back some things in this league . . . we're going to make the CFL fun to watch again."

With Mitchell's status secured, Hamilton can work on keeping some of its pending free agents. The Ticats have 22 players set to hit the open market Feb. 14, including 1,000-yard receivers Tim White and Steven Dunbar as well as starting linebackers Kameron Kelly, Simoni Lawrence and Jovan Santos-Knox.

"They [Ticats] have told me there are some guys they'd like me to lean on but obviously there are guys they didn't have to say that for," Mitchell said. "There are guys in this locker room who catch the football that I want [back].