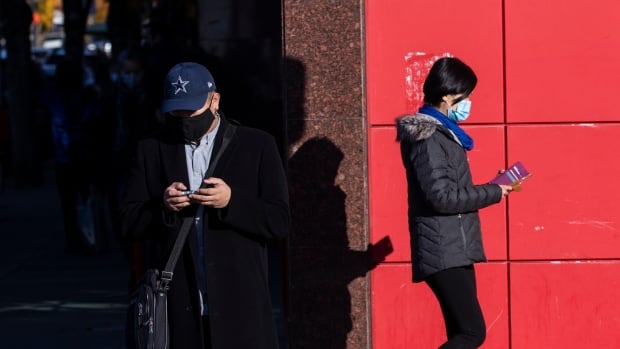 The portal for the benefit went live at 8:30 a.m. PT. Within one minute, the website would no longer load for some users. Others were able to start their application only to be kicked off before they could finish it.

"I was three-quarters of the way through the application then, all of a sudden, [I was] booted out," said Charlotte Zesati, a single mother to a 15-year-old daughter.

"It's obviously a little bit frustrating because [the benefit] is really going to help me and my family," added Zesati, who lives in the Downtown Eastside in Vancouver.

By 2:30 p.m. PT, nearly 50,000 British Columbians had already successfully applied for the benefit, according to the Ministry of Finance. The province is advising anyone who's having trouble loading the application to close the website and try again in a short time.

Zesati, who is in her mid-40s, is immuno-compromised and usually relies on disability assistance, part-time time work and gig work to make ends meet. She stopped working in mid-October as case numbers rose.

The benefit offers a one-time payment of $1,000 for families with incomes under $125,000, with a reduced amount for families earning up to $175,000. Single-parent families should also qualify.

"It means just being able to get a few extra things. Extra food, cat food, paying extra bills I haven't been able to pay. This year has been tremendously hard," Zesati said.

"And for me, personally, my daughter's birthday is in January, so that's really going to be able to help."

Linda Harris, who is retired in Sechelt, B.C., was also kicked off the site part way through her application within 15 minutes of the site's launch. She was up early at 7 a.m., ready to go, but the site went blank just as she was double-checking her banking information.

"I'm on a pension and really kind of needed this money right now. Bank account's a little bit dry. It'll be OK, but it's disappointing because I was on top of it and ready to roll."

In a tweet just after 9 a.m. PT, the province said it was seeing "extremely high volume" on the site and asked users to be patient.

"We are aware that some are having difficulty and we are working on the issue," the tweet read.

CBC has reached out to the province for further information.

Eligibility for the benefit is based on one's 2019 tax returns, so people who were high earners last year but who lost their job during the pandemic might not be eligible.