Home Bank of England Rates Spark: You break it, you buy it

Rates Spark: You break it, you buy it

When central banks implied that bringing inflation down required breaking things along the way, then what happened to the gilt market is likely not what they had in mind. Today's inflation data releases should underpin the European Central Bank's hawkish stance, but amid systemic fears markets may be more cautious in extrapolating from it than before

Gilt turmoil forces the BoE to row back Tensions between fiscal and monetary policy, and not just in the UK If growth fears don't stop central banks, systemic risks could Today's events and market view 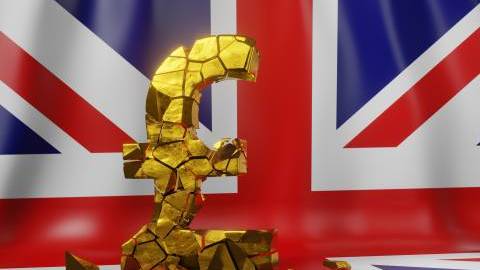 Gilt turmoil forces the BoE to row back

Yesterday the BoE was forced to row back on its immediate quantitative tightening (QT) ambitions and even pressed to buy gilts again. Fearing a crash in the gilt market when vicious moves in long end rates were to trigger margin calls and further forced selling, the Bank of England kicked off its intervention with a first operation to buy back bonds with a maturity of 20 years or longer. In the end it bought only £1bn out of the £5bn it was prepared to buy, but behind it stand plans for such auctions every weekday until 14 October and a promise to conduct purchases at whatever scale necessary to restore orderly market conditions.

For now, the BoE still plans to kick off QT with a delay at the end of October, which we think still looks challenging. We think the BoE could be forced to intervene for longer and further postpone QT. There was clearly a financial stability aspect to the BoE’s decision yesterday, but also a funding one given the controversial mini budget – the IMF’s warning against large and untargeted fiscal packages, and it highlighting the importance of fiscal and monetary not working at cross purposes given the inflation challenge, were unusually pointed. For now, there have been few signs of the Treasury rowing back on its plans.

Not out of the woods yet: BoE hike expectations continue to climb

Tensions between fiscal and monetary policy, and not just in the UK

The tension between fiscal and monetary policy is not confined to the UK. For sure there is always some cross-market correlation that also sees for instance EUR money market pricing of hikes being pared back when the UK front end plunges by 40bp on the day. The Bank did push back against emergency rate hikes, but in the wider context the Bank caving to systemic risks by partially rowing back on its tightening plans sends an ominous sign also to the ECB.

Its problem is crystalised in its handling of Italian sovereign bond markets. For now, ECB officials appear confident that they have taken necessary precautions –  the Transmission Protection Mechanism stands ready to buy Italian bonds should their spreads spiral out of control. They continue to highlight the importance of further tightening, including starting the discussion on quantitative tightening. Albeit ECB arch-hawk Holzmann commenting that a 100bp hike in October would likely be too much could be interpreted as an attempt to curb all too excessive expectations.

Italian bonds are caught in the slipstream of higher rates volatility

Markets, however, are showing more signs of concern over systemic stresses as monetary policy reins are further tightened across the globe. After the UK episode the implied volatilities in rates markets remain at record levels. We are seeing wider spreads in EUR money markets as the 2Y IRS vs OIS basis pushes past 30bp, its widest since the first half of 2020 when the pandemic hit. Bund spreads versus swaps have widened to new records (mind you, not in ultra-longs where the gilt debacle played out) with 10Y Bund yields now close to 100bp below the swap rate.

Prospects of the ECB running down its Bund holdings and Germany announcing plans yesterday to increase its 2022 funding by €22.5bn might have been thought to help ease the collateral scarcity issue plaguing the Bund market. But maybe the notion of the ever-so conservative German financing agency upping its issuance have channeled concerns over broader government deficit increases in the eurozone. This is against the backdrop of unease surrounding Italy, fragile geopolitics and a central bank pulling back at the same time.

The EUR curve has re-steepend markedly in recent days. While initially following the lead of gyrations of the sterling markets, yesterday's steepening went into the oppsite direction. We might be reading too much into the relative moves, but supply under current conditions may play a role in keeping the eurozone long end from rallying more notably on the day that 30Y gilt yields dropped by more than 100bp. On Tuesday the Netherlands issued a new 30Y bond and Germany has flagged plans to launch a new 30Y benchmark in October.

Today will see the preliminary CPI data from Germany and other eurozone countries, which should point to further acceleration in price pressures. Given the ECB's new reaction function, it will underpin the ECB's ongoing hawkishness. However, the UK turmoil seems to have added increased systemic fears to the market equation. This could hold markets back from resuming their hawkish pricing too quickly, slowing the flattening of curves.

Central bank speakers, especially those from the BoE, will receive increased attention. The BoE's Ramsden, Tenreyo and Pill will have public appearances today. UK PM Truss is also due to appear in a series of radio interviews, her first appearance since last week's mini-budget.

From the ECB we will see Chief Economist Lane amid an unusually busy slate of speakers. Other data relases of note today are final second quarter GDP figures for the US as well as the initial and continued jobless claims figures,

In primary markets Italy sells 5Y and 10Y bonds as well as floating rate notes for a total of up to €6.25bn.